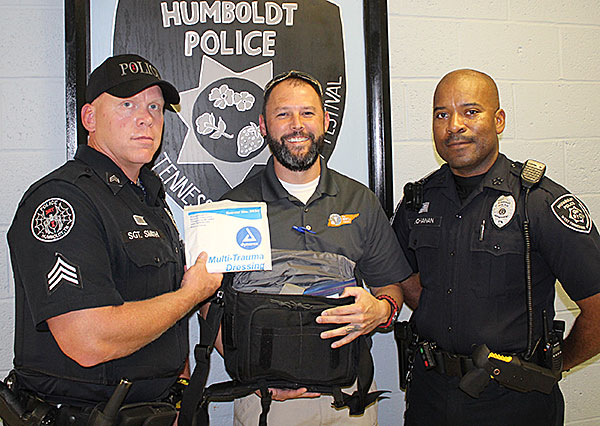 MEDICAL KITS – Jeremy Lansing (center) of WATCH 7, holds one of the Stop the Bleed kits donated to the Humboldt Police Department last Friday. The kits can be used by police officers to help victims before medical personnel arrive. HPD received 28 kits, enough for every police officer on the force. Proudly accepting the kits are Humboldt Police Chief Reynard Buchanan (right) and Sgt. Heath Smith.

Humboldt police received a nice donation last week. Each officer will now have medical kits to use on site in case of an emergency.

Jeremy Lansing, of WATCH7, is using federal funding to build kits that are donated to police departments.

“The White House started the initiative, Stop the Bleed, with all the mass shootings in the country,” Lansing said last week. “ We first got the Stop the Bleed kits to schools. Then we thought, what’s next? Police departments! They can help themselves and civilians (in an emergency situation such as shootings).”

WATCH7 is a regional healthcare coalition formed in 2014, funded through the National Healthcare Preparedness Program, a grant from the US Department of Health and Human Services to the TN Department of Health. The WATCH7 healthcare coalition is a collaborative network of healthcare organizations from both the public and private sectors (includes every hospital in West Tennessee with the exception of Shelby, Fayette, Tipton and Lauderdale counties; that serve as a multiagency coordinating group that assist with preparedness, response, recovery and mitigation activities related to healthcare organizations disaster operations.

Humboldt Police Chief Reynard Buchanan is thrilled to receive 28 kits, enough for every police officer on the force.

“This is a good resource,” Chief Buchanan said of the kits. “I’m glad Mr. Lansing reached out to us with additional tools. We can help victims until medical personnel arrive.”

“These kits saved the police department from spending thousands of dollars,” Chief Buchanan added. “We can use that money to go toward other needed items.”

“We bought the bags and contents, and put them together ourselves,” Lansing noted. “We didn’t want kits in each vehicle, we want one of these bags next to every officer.”

Lansing is working to get a Stop the Bleed kit in the hands of every officer in West Tennessee. He said they have been working on the project for about a year and a half. Members of the WATCH 7 staff also offer free training on how to use each product in the kits.

WATCH7 coalition funds several projects each year related to emergency preparedness/response activities for healthcare organizations and the community.  Stop the Bleed was a project that the coalition membership was excited to fund, as part of a two-phase project. Phase I was to supply life pack basic kits to every public school grades K-12. The coalition funded over 160 emergency kits for every public school within the coalition region with the exception of Madison County, which was funded through the Jackson-Madison County Health Department.

These emergency kits contain emergency medical supplies that would be used to treat traumatic injuries of students, faculty or visitors. Each kit contains five packets that contain gloves and multiple size gauzes, a tourniquet, a multi-trauma dressing, roll gauze, trauma sheers (scissors), tape and Vaseline gauze used for chest wounds. The rugged canvas bag has multiple pockets on the inside compartment and on the outside.

Recently, Phase II of Stop the Bleed project began by distributing over 650 tactical emergency kits to every certified law enforcement officer in northwest Tennessee, this includes Henry, Benton, Carroll, Gibson, Weakley, Obion, Lake, Dyer and Crockett counties (commonly referred to as TN Homeland Security District 9). With the completion of the kits being distributing and in partnership with TN Homeland Security District 10, who funded a similar project in a previous grant, WATCH7 can now attest that every law enforcement officer (local, state, and federal) has an emergency kit with supplies to utilize if needed to control and stop bleeding.

“It’s all about saving someone’s life,” Chief Buchanan said of getting these kits. “The difference between life and death can be minutes. These kits can be beneficial to police and the public.”