Wickersham is a native of Sylmar, Cali. where he played baseball while attending Sylmar Senior High School. He played college baseball at California State University in Northridge and moved to Tennessee in 1996 where he finished his bachelor’s degree at UT Martin in 2001.

“We are excited to have Coach Wickersham join our Gibson County coaching staff and lead our baseball program,” Lownsdale said. “He has a history of successful programs he has lead based on the principles of teaching his players hard work and character. We feel he is the right guy to push our players to be successful on and off the field.”

Wickersham began his 21-year coaching career as an assistant baseball coach at University School of Jackson in 1999. While at USJ, the Bruins made a run and won three state championships in four years 1999, 2001 and 2002. After four years at USJ, Wickersham took an assistant coaching role with Trenton Special School District, where he served as an assistant softball and middle school football coach over the next five years.

But his passion was coaching baseball so he left Trenton to take an assistant baseball coaching job at Bolton High School. He was named Crockett County head coach in 2010. While at Crockett Co., he won over 90 games and a berth to the Class AA state tournament in 2013. Before Wickersham’s arrival at Crockett County, the Cavaliers were averaging nine to 12 wins a season.

Wickersham comes to Gibson County after a successful four-year run with the Class AAA (the largest class in Tennessee) Brighton Cardinals. This season, the Cardinals went 30-7, winning their first 18 games, had a team batting average of .337, a team ERA of 2.03, won the district tournament championship for the first time in a decade and advanced to the region tournament.

Wickersham runs his program like a college program, with discipline, paying attention to details and building character.

“It’s not all about wins and losses; it’s about building character,” he said. “It’s about life lessons, teaching my athletes to be strong Christian men, great husbands, an awesome dad. If we can do that everything else will fall in place.

“I want my teams to be process based and not results based,” Wickersham said. “We will learn how the season is not a roller coaster ride. We will try to stay calm through the good times as well as the bad times. It’s kind of like rowing a boat. You have a team of guys in the boat, rowing at the same time, with their backs to where they are going. If one guy doesn’t row with the rest of them, their boat will zag and not get to where we want to go. If only half of them row, then they will just keep going in a circle. Sometimes we are in calm water and sometimes it gets a little rough. The great thing is, if we just keep rowing we can get out of the rough waters together. I expect us to improve by 1 percent each day through hard work, discipline and paying attention to details.”

Wickersham believes baseball has four seasons: off-season, pre-season, regular season and post-season, but teams play for the post-season. He looks forward to building on last year’s season and getting started in the first season that he calls the off-season.

Wickersham and his wife, Libby, executive director of the Greater Gibson County Area Chamber of Commerce, live in Rutherford. 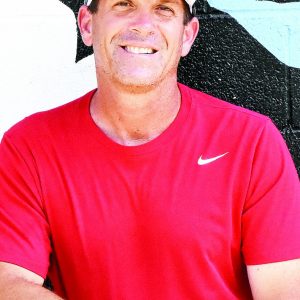