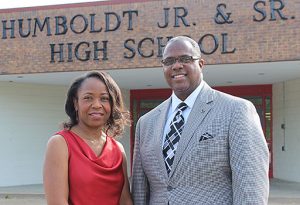 WALKER RESIGNS – James Walker (right), principal at Humboldt Jr./Sr. High School, submitted his resignation to Dr. Versie Hamlett, superintendent of Humboldt City Schools after accepting the principal position at Jackson Careers & Technology Middle School and Isaac Lane Elementary School. Walker served as principal here for four years. He will now move to the school in the neighborhood where he grew up.

Humboldt City Schools is losing one of its leaders. James Walker, principal at Humboldt Jr./Sr. High School submitted his resignation and has accepted a new position with Jackson-Madison County Schools.

Walker is moving back to the community where he was raised and will be principal of Jackson Careers & Technology Middle School and Isaac Lane Elementary schools. Both schools are on the same campus but in separate buildings.

“I was not seeking a new job—it just fell in my lap,” Walker said. “Dr. Eric Jones (JMCS director of schools) approached me, mentioned an opening.”

The two schools are on the property where Jackson Jr. High, later Jackson Middle, once stood. Walker attended school there as a youngster. When the 2004 tornado hit, the school was destroyed.

Last Friday’s graduation was the last Walker would see as leader of HJSHS. His last official day will be June 30 but he expects a new principal will be named before then.

“Dr. (Versie) Hamlett (HCS superintendent) has been super to work for,” Walker said. “She and the central office staff are all wonderful. I will miss them. I’ll miss Humboldt and without a doubt, miss the students. I’ve made relationships with the students. I’ll miss seeing these students mature. I’ll also miss the staff. We have a very good faculty who care about the kids. They work hard day-in and day-out.”

“Mr. Walker has been such a great role model for our students for the last four years,” said Dr. Hamlett. “He has unselfishly given his time and talent to change the culture and climate of Humboldt High school.”

Walker will be moving from a school with just over 400 students to one with over 1,100,

Walker first came to Humboldt in the 2014-15 school year and was one of Dr. Hamlett’s first hires. One of Walker’s first hires was Coach Ron Abernathy, which at the time was one of the biggest news stories in town, with Humboldt being a basketball city.

“This was my first principal position,” Walker noted. “It was a big transition from being an assistant principal for six years. Dr. Hamlett and the central office made it a smooth transition with all the resources that were available. I give Dr. Hamlett a lot of credit for helping me grow as an administrator, always pushing for professional development to help me grow.”

Looking back at his four years at Humboldt Jr./Sr. High School, as with any new job, there were some ups and down.

“Perhaps the biggest challenge was establishing a new culture,” Walker explained. “That’s only because of the situation where I didn’t know the students and they didn’t know me. We had to build relationships. The same with the staff as well.”

Walker hit the ground running. He added two new positions, an instructional coach and a consulting teacher. The instructional coach helps and supports teachers with instruction, help with lesson plans and there to assist to assure teachers are covering the materials needed in the classrooms. The consulting teacher helps with discipline, is the facility manager for building maintenance and works with outside organizations using the facilities.

Walker implemented Read 180, a program that helps students read at grade level. He said this program has been vital in closing the gap for Humboldt students.

“My first year, I had to improve the graduation rate,” Walker noted. “We’ve done that by creating a culture geared toward college and career readiness. Along with that, we’re creating a culture with our kids taking the ACT test seriously and it means something to them. We started the ACT prep class my second year. It’s been very successful and helped raise our ACT scores.”

Walker brought the ACT prep course concept from his previous job at Tipton County Schools where he was assistant principal. He called the principals and put a team together to visit Tipton County to see how the program worked. The following fall, Humboldt students were offered the course.

“The school has come a long way in my four years but there’s still more work to be done,” Walker said. “I encourage the new administrator to push kids to excel on state testing. The most positive thing we can do is have our kids be college ready or job trained. With industries looking to the area, they look for a quality workforce. Humboldt City Schools is doing our part to get students ready and the other special school districts are doing the same.”

“Under his leadership, we have made great strides and will be forever grateful for his commitment and dedication to our students,” Dr. Hamlett said. “We will truly miss him.”

“I feel like we have a lot of outstanding students in this school,” Walker said in closing. “I hope the community can help find ways to keep the people here, let our studenst go to college and come back to be professionals and leaders. They can and will be great because they have the potential to be great.”