The Gibson County Lady Pioneers are on their way to the Class A TSSAA State Tournament in Murfreesboro for the first time in program history.

Saturday the Lady Pioneers beat Memphis Academy of Health Sciences 15-0 in an eventful sectionals game. The journey began at 8:30 a.m. as the bus left Gibson Co. High School headed to Memphis. The game started on time at 12:30 p.m., but 28 minutes later a thunderstorm rolled in and soaked the field with about an inch of rain.

After the rain stopped, the coaches and umpires started calling around to find a dryer place to play. Both teams left Memphis and went to Covington, but by the time they got there, Covington had had a downpour too. Nearly four hours later, the teams settled on Brighton softball field to finish the game.

Macey Neal walked and stole second and third bases to start the game. Neal scored on a sacrifice by Ashley O’Daniel to give Gibson Co. a 1-0 lead. Maddie Neal was hit by a pitch, and Zoey Neal walked. Lexie Garner hit a RBI infield single to score courtesy runner Molly Lamar to make it 2-0. Chloe Hopgood singled, then it started to rain and the game was stopped.

At 3:55 p. m. the game resumed with GC courtesy runner Savannah Allred on third base and Hopgood on second base. Emery Presley hit into a fielder’s choice, and Allred scored on a wild pitch to give her team a 4-0 lead.

Gibson Co. added a run in the second and third innings to make it 6-0.

In the fifth inning, Brittney Kolwyck doubled to center field and scored on a double by Jaci White for the team’s final run and a 15-0 lead.

“This is the greatest group of girls that I have had the opportunity to coach,” said Lady Pioneers coach Chris Lownsdale. “Their abilities, teamwork and their love of the game has made this year very enjoyable and exciting.”

Lexie Garner was on the mound for the Lady Pioneers, throwing all five innings. She struck out the first seven batters she faced. Garner allowed only one hit, no runs, and no walks with 11 total strikeouts.

The Lady Pioneers will play Unaka Tuesday at 4 p.m. in the first round of the state tournament at the Murfreesboro Sports Complex and McKnight Fields in Murfreesboro. 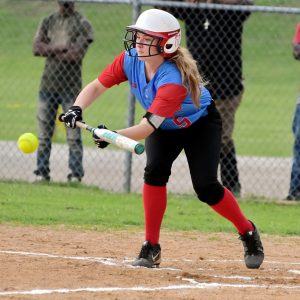