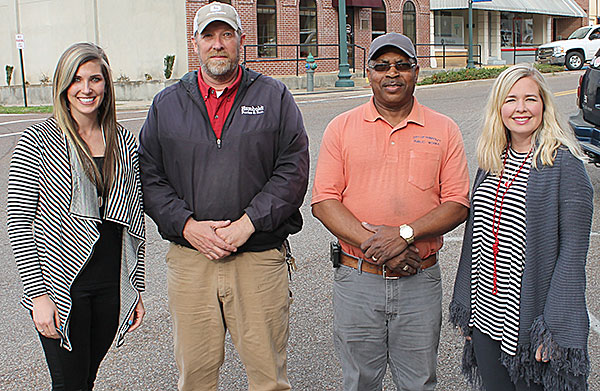 “They do so much behind the scenes,” Swingler said of these unsung heroes. “People don’t realize how much work they do.”
Public Works Superintendent Willie Reed and Parks & Rec. Director Jeff Graves both say they are humbled to be recognized, not for themselves, but for the workers with both departments. 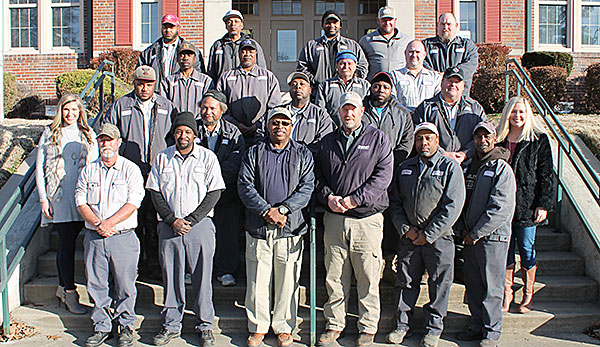 HARD WORKERS – These hard working men of the Humboldt Parks & Recreation Department and Humboldt Public Works have a hard task preparing for the West Tennessee Strawberry Festival and even busier during festival week. That is why festival president, Melissa Swingler, and general chairman, Chelsea Caraway, have dedicated this year’s festival to these unsung heroes.

These 25 men, 16 with Public Works and five with Parks & Rec, do more than most people know. In fact, Swingler didn’t realize how vital these men are until last year’s festival when she got a first-hand look at the amount of work they actually do.

“They work way before the festival getting everything ready,” Swingler explained. “They work during the festival and after. They deserve to be recognized!”

“It starts about two weeks before, cleaning up the city, around the stadium, Main Street, the horse arena, carnival grounds,” Reed said of his crew. “We get the dumpsters out there (carnival grounds).”

“Once the festival starts, we go event by event, moving bleachers, getting trash boxes out and picked up, road closures at the different locations—our guys know what to do,” Graves said.

Even though they are two separate departments, each with their own duties and chores, both work together as a team.

To honor these men this year, they will be in both parades. Thursday’s Junior Parade, Reed and Graves will ride in a golf cart and the crewmembers will walk behind. During the Grand Floats Parade, the entire crew will ride in style through the parade route on a decorated trailer.

Reed and Graves said they typically allow the men to enjoy the parades each year. But they are working hard before the parades getting everything perfect, and after the parades cleaning up Main Street and the surrounding areas. This year will be no different, other than both departments partaking in the parades rather than watching them.

Not only will the men be honored in the parades, they will be recognized at every event throughout the week.

“Melissa couldn’t have picked a better group,” Caraway said of Parks & Rec, and Public Works being the dedication recipients. “I haven’t seen it before (the amount of work both departments do) but in this position, I will see it this year. It will be an eye-opener.”

“I’m glad our guys are being honored,” Graves said. “Some of these have 20 years-plus with the department.”
“I’m tickled to death for our guys,” Reed added.

“A lot of people work behind the scenes but they go above and beyond,” Swingler said of festival week and the amount of work the two departments put in. “It shows how many people it takes to put on the festival. This year, I hope more people recognize how much work they do.”