A tractor-trailer carrying 44,500 pounds of cheese caught fire near Bradford early Wednesday morning, causing hundreds of thousands of dollars worth of damage.

The Gibson County and Bradford Fire Departments and Gibson Co. EMS responded to what they thought was an ordinary 18-wheeler truck on fire just before 6 a.m. Feb. 28. The truck, owned and driven by Harold Roberts, of Bradford, was carrying a massive amount of cheese from Texas to Nashville. According to Gibson Co. Fire Chief Bryan Cathey, Roberts stopped at his home on Davis Grove Road to visit his son.

Roberts had replaced a blown fuse in the truck’s cooling system and went inside his house. When he returned to the truck, the trailer was on fire.

“He tried to unhook the truck from the trailer but was unable to due to heavy smoke rushing out of the cab door when he opened it,” Cathey said.

Cathey said an electrical short in the truck’s refrigerator unit likely caused the blaze, which quickly engulfed the truck cab and the trailer. Cathey said the cheese was encapsulated in a thick plastic container that also burned.

Two different state departments responded to the scene to make sure there was no hazardous runoff in the water system and to insure the cheese was disposed of properly. Rasberry Wrecker in Trenton removed the burned tractor and trailer from the roadway. The Gibson Co. Sheriff’s Dept. kept Davis Grove Rd. closed for more than eight hours.

Officials also called a cleanup crew to dispose of the cheese at an out-of-county landfill. The Tennessee Dept. of Agriculture oversaw the process. The Gibson Co. Highway Dept. also assisted with the cleanup and repaired the roadway after the truck was removed. 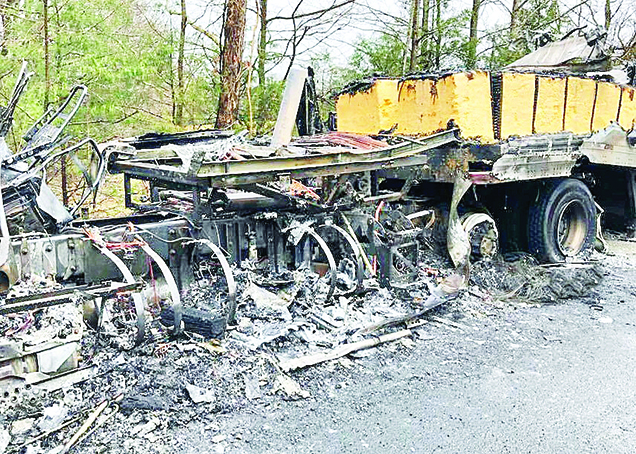