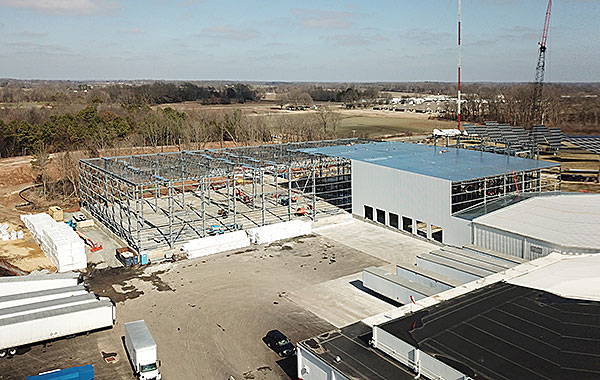 A local factory is in the midst of a major expansion. Bondards’ Creameries is increasing its capacity and adding new jobs.

Brent Jewett, vice president of Process Cheese Operations, said the project is coming along nicely. Jewett said the company had hoped to complete the construction by June. But due to the ice and snow in January and the wettest February in history, the target date has been pushed back to July.

“The $35 million expansion consists of a back-end production line with an automated distribution center,” Jewett said last week. “It will have AGVs (automated guided vehicles), unmanned forklifts, in the warehouse and a software system to run the AGVs.”

Jewett noted the expansion will allow Bongards’ to run multiple lines consecutively. They have already hired 50 people and expect to add another 40 to 50 positions once operations in the new addition are complete. This would double their previous workforce.

“This is exciting news that the expansion is underway,” said Kingsley Brock, director of Gibson County Economic Development. “The fact that they’ve already hired 50 people shows they are a great company, well on their way to achieving what they announced last year.”

The Humboldt plant is a cheese processing facility. Bongards’ Creameries has a plant in Minnesota, their home base, which produces various cheeses. The cheese is shipped to Humboldt where it is processed and shipped for distribution. Jewett said the company has a similar plant to Humboldt’s in Minnesota as well.

“We have the capability of producing 175 million lbs. of cheese per year,” Jewett stated. “We sell to fast food chains and national chain restaurants. We are also the largest supplier in the nation to school lunch programs, both federal and state programs, with reduced fat and reduced salt products.”

They also sell directly to consumers under their own Bongards’ Creameries label.

Brock, working for Gibson County and Humboldt officials, was able to get the Tennessee Department of Economic Development and TVA involved with Bongards’ expansion to put together a package of incentives to help support the growth, making it easier and less expensive through reductions.

With 90 new jobs, Jewett said the workforce could reach up to or over 200.