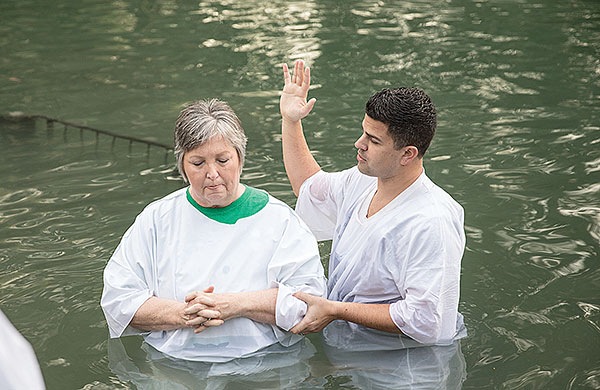 BAPTIZED – During a recent trip to Israel, Debbie Goodrum had the opportunity to be baptized in the Jordan River, just downstream from the actual site where Jesus Christ was baptized. She and her husband, Tommy, were part of a group that toured the Holy Land for nine days in January.

A Humboldt couple recently had a trip of a lifetime visiting the Holy Land. Tommy and Debbie Goodrum toured Israel last month.
The Goodrums were among 62 people on the trip. The majority of the group was from Englewood Baptist Church in Jackson. There were eight couples that are not members of Englewood who attended, including the Goodrums.

“It was the most profound experience of my life,” Debbie Goodrum said. “To go and see where Jesus lived, where he ministered, to see places like Mount of Olives, to see Gethsemane where he was arrested, to see the path knowing he was beaten, spit on and humiliated, it was very powerful. I needed to walk that path to feel it within my own life.”

Goodrum said the reason she and Tommy went to the Holy Land is because God has been working in their lives. They needed to go there and walk in his footsteps.

Even though the trip was only nine days, the first day of the trip was a travel day to Tel Aviv, Israel. Those eight days on the ground, the tour group packed many stops of Israel’s most Biblical locations.

The tour began early on day-2 visiting Caesarea by the Sea, the ancient city of Joppa built by Herod, the Roman Theater, which hosted the earliest Olympics, and Herod’s Palace where Paul was imprisoned.

Day-3 included Megiddo, which was built 7,000 years before Christ, the location of Jezreel Valley or the Valley of Armageddon. There were stops at Mt. Carmel and Tiberius on the Sea of Galilee. 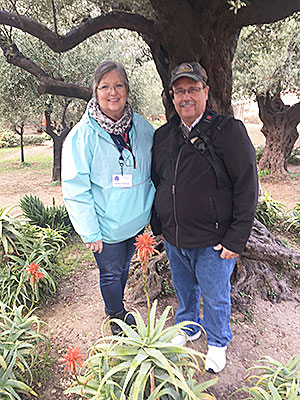 Day-4 began with a boat trip on the Sea of Galilee where Jesus calmed the waters and where he spoke to the multitudes.
Other stops were Capernaum where Jesus healed Peter’s mother, and Caesarea Philippi known for Peter’s great confession that Jesus is Messiah.

Day-5 was one of the best days of Goodrum’s life when she was baptized in the Jordan River very close to the actual site where Jesus was baptized.
The final stop that day was Mount of Beatitudes, the site of Jesus’ Sermon on the Mount.

Gideon’s Springs was part of Day-5 as the tour group traveled Via Maris, the ancient trade route and Kings Highway to the Dead Sea.

Day-6 hit some of the more historical locations from the Holy Bible in and around Jerusalem. The Garden of Gethsemane’s Mount of Olives, according to the Bible, is where Jesus ascended to Heaven after his resurrection.

They visited the House of Caiaphas where the high priest plotted to kill Jesus and where Peter witnesses but denied Jesus.

Lions’ Gate, also called Stephen’s Gate, is where Stephen was stoned to death for proclaiming Jesus as Messiah.

The day ended visiting Via Dolorosa, believed to be the path Jesus walked on the way to his crucifixion. 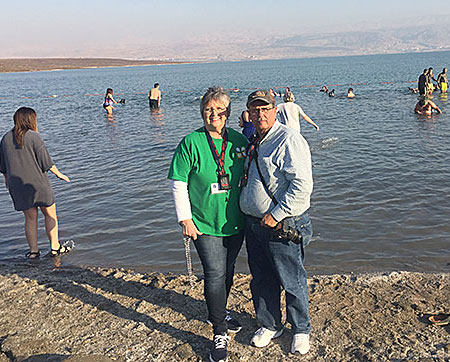 Day-7, the group saw the Wailing Wall, sometimes called the Western Wall. The Wailing Wall is a small segment of a larger ancient retaining wall of the second Temple Mount built by Herod the Great. Today, it is the holiest site where Jews are permitted to pray. People write their prayers on paper and place the paper in cracks of the wall. Goodrum wrote a prayer for Humboldt, our country and the world and placed it on the wall.

The first Temple Mount built by Solomon the son of David, was destroyed by Babylonians. The Romans destroyed the second temple. Jews believe the third and final temple will be built here. It is the third holiest site of Muslims making it one of the most contested religious sites in the world.

Day-8 began with Masada, which was built 30 to 40 years after Christ by Herod as a fortress. People fled there after the second temple was destroyed.
Qumran, now an archaeologist site on the West Bank, is where the Dead Sea Scrolls were found. The history of the earliest books of the Old Testament was found in caves. 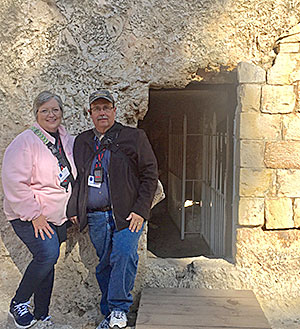 The Dead Sea sits 1,400 feet below sea level and has approximately 35-percent salinity.

“The story is faith,” Goodrum said looking back at the Holy Land trip. “I know who Jesus was. But I wanted him so bad in my life. I was willing to go to any length. I found that in Israel. My love for Jesus grew so much. I can’t put it into words.”