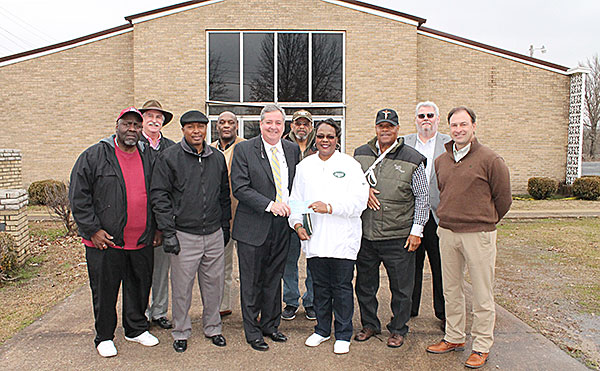 A tragic fire at the end of last year had the community mourning just before Christmas. Now that dark cloud of smoke has a silver lining.

St. James Baptist Church suffered major damage on Saturday, December 9, 2017. The fire was finally under control around 2 a.m. and completely out by 3:30 a.m.

But that didn’t stop the church from continuing on. Dr. James Baltimore, pastor of St. James, and his congregation held Sunday service less than seven hours later in the Humboldt Senior Citizens Center.

“This church is 138 years old,” Dr. Baltimore said last week. “It first started through First Baptist Church who donated the land and funded the first building.”

The structure that burned in December is actually the third church building. The other were either replaced from age or out-grown.

The current building has three cornerstones, one from each building. Dr. Baltimore said the new building will add a fourth.

“We certainly understand this devastating fire loss can be a very emotional time for the church,” Gardiner said. “It is our goal to make the claim process as less stressful as possible so that the healing and rebuilding can begin. We have assured the church that we look forward to continuing our relationship now and in the future.”
Shortly after the fire, it was thought the sanctuary would be saved but after investigators, engineers and insurance inspectors went through the church, it was deemed a total loss.

Hale was instrumental in getting a fast claim and money in the hands of the church to rebuild. Hale is not only the agent but a friend of the church.

“I contacted Dr. Baltimore early Sunday morning and prayed for him,” Hale recalled of the day after the fire. “I started the process on the claim. It took a couple of weeks with the engineers and inspectors determining how the fire started. Plus Christmas and New Year’s slow us down a bit.”

But now, two months later, the church has funding to rebuild and continue with the healing process. 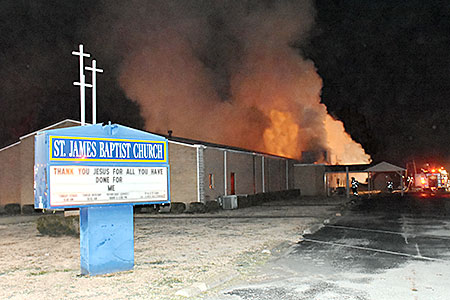 CHURCH FIRE – Humboldt Fire Department was dispatched to St. James Baptist Church in Humboldt. The rear of the church was engulfed when fire fighters arrived. After hours of fighting the blaze, the sanctuary was believed to be saved but has smoke and water damage. Later the church was deemed a total loss.

The night of the fire, when Dr. Baltimore arrived, he couldn’t believe his eyes. He said he sat in his car and cried. But hours later, well over 100 churchgoers attended what he called a wonderful praise service.

“I can’t believe how close everyone has gotten,” Dr. Baltimore said of the outpouring of support from the community. “The Ministerial Alliance has been wonderful. There have been pastors, deacons, everyone supportive. They said, ‘call us and let us know what we can do to help’.”

Dr. Baltimore praised Humboldt Mayor Marvin Sikes who was willing to do whatever it took to help out the people of the church.

“The mayor came to me and said if you want to use the Senior Citizens Center, you can as long as you need,” Dr. Baltimore noted. “I asked him ‘how much’ (to rent it)”? He said ‘nothing’. That’s the kind of man he is.”

That Sunday service, Dr. Baltimore said he planned a sermon but when he got in front to that crowd, that sermon went out the window and he preached from the heart. He recalled the sermon being taken from the book of Job, with scriptures, “Blessed be the name of the Lord” and “The Lord giveth and the Lord taketh away”.

“He defines us,” Dr. Baltimore preached. “He purifies us through trials and tribulations.”

The next step is to tear down the current building and prepare to rebuild, Dr. Baltimore said. He hopes to have it completely demolished and the debris hauled off in the next couple of weeks.

He noted the current building could hold around 300 or more people. Dr. Baltimore said he can recall three times that building being completely full and needed to bring in extra chairs. Those were all for funerals. St. James has always opened their doors to the community as a place to hold funerals, weddings and other social events, even if the people weren’t members of the church.

“That’s just who we are as a church,” he explained.

Even though the plans for a new church are still in the infant stage, Dr. Baltimore has a vision of what the church will be like. It will be close to the same size as the old building but laid out much better to accommodate 500 to 600 people. With the new facility, he plans to “evangelize” the community.

Hale and Baltimore said the next step will be getting with contractors and come up with a plan, make sure all the zoning and any other factors to get the ball rolling. Once they have a final plan on the building, the church will hold a groundbreaking ceremony. He invites everyone in the community to attend. Construction would begin within a few days. Dr. Baltimore is hopeful to be in the new church building before the end of the year.

As a true man of God, Dr. Baltimore said, “It’s all about Jesus Christ. We depend on him!”