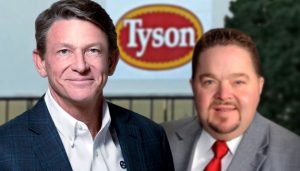 A recent article circulating on Facebook regarding the future Tyson Foods plant in Humboldt has gotten under the skin of many Gibson County residents, most notably Gibson County Mayor Tom Witherspoon.
Mayor Witherspoon was targeted by an article in the Tennessee Star, a predominantly political online news service with a conservative slant based out of Franklin, entitled “Boyd-Endorsing Mayor May Help Humboldt, Tennessee Become a New Refugee Resettlement Site.”
“I will say this,” Mayor Witherspoon began in response to the article. “If the Tennessee Star was a legitimate journalistic organization, they would have called my office for a statement. They did not. They are a blog paid for by a political candidate. They don’t know anything about Gibson County or our citizens. They are just trying to generate clicks on their site. The more clicks they get, the more their candidate pays them.”
The article, which is aimed at gubernatorial candidate Randy Boyd, alleges that Tyson “has demonstrated a commitment to employing refugees” and “may also continue a trend of transforming small rural towns by becoming a magnet for federal refugee resettlement contractors looking to place low-skill workers who don’t have to speak English.”
The article also accuses Tyson and other similar meat processing companies of “hiring refugees as a way to avoid hiring illegal alien labor”, citing a court case where six Tyson employees were indicted for allegedly smuggling illegal Mexican workers across the border. What the Tennessee Star does not mention, however, is that all six of those employees were summarily acquitted of those charges in court. The site also draws parallels between the future Tyson plant and the current plant in Shelbyville, which employs a number of Somali immigrants, who happen to be Muslim.
The Shelbyville plant made national “fake news” headlines when internet fearmongers claimed that Tyson had taken away Labor Day as a paid holiday and given the Somali workers a paid holiday during Ramadan, all claims which have been disproven via fact-checking site Snopes.com and the Shelbyville Times-Gazette.
“Look, I wouldn’t know where to find a Somali refugee if I wanted to hire one,” continued Mayor Witherspoon. “Tyson is coming to Gibson County to hire Gibson Countians. They are coming because we have a great workforce that is ready to take advantage of these jobs. It’s disheartening to me to believe that anyone in Gibson County would believe rumors like these. You can always tell when a political candidate is behind in the polls. They’re the first ones to start making up stories.”
The Tennessee Star, which presents itself to be a full-service news organization, focuses primarily on issues that affect the Tennessee Republican Party and stories involving Muslims. Much of the site’s political content decries Boyd’s work in the state while championing the accomplishments of rival gubernatorial candidate Mae Beavers.
“All this does is hurt Gibson County,” Mayor Witherspoon concluded. “If we allow ourselves to run our country or our county based on fear of others or fear of the unknown, we are going to fall.”
The site, which has only been operational since early 2017, also offers “Lifestyle” and “Sports” sections with cut-and-paste content from newswires and other services. As of last Thursday afternoon, the Tennessee Star’s Facebook page has only 3,983 likes.
“One of the reasons we chose Gibson County, Tennessee is due to the available workforce,” said Tyson representative Worth Sparkman. “Our research says there are plenty of residents within a 30-mile radius of the location who would like to take advantage of our high wages and benefits to keep this location fully staffed. According to our research there is an available workforce of 123,000 people within a 30-minute drive. Additionally, there about 4,000 unemployed residents within a 30-mile radius. We hope to hire from as many people from local communities as possible.”