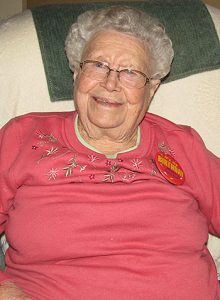 Most of us hope to live a good, long life. Some of us get that chance and some lucky ones of us will, like Dorothy Gordon, get to do it with a flourish.

Born December 14, 1917, Dorothy Gordon turned 100 years old last Thursday. Although she says, “I don’t know the difference from 70 to 100. It’s just another day,” she has been granted a good mind and for the most part, good health. Her spirit and mind are strong.

Gordon spent 24 years in the restaurant business in Humboldt. She has lived in Humboldt for over 80 years. She still vividly recalls the worst experience of her restaurant years when one man came into her restaurant and kept putting his hand in the water pitcher. The man told her he did it at home. Gordon said she asked the man to pay his bill, leave and never come back. To her knowledge, he never came back.

Having spent so much time with the public, Gordon knows a lot of people. She, in her business, had many parties, serving both the rich and the poor.

She lived on her own, long after her husband passed in 1990, and after the death of her sister a few years ago. Gordon says she had a garden up until last year. Her son did not think it was safe any longer for her to be tending a garden.

A fall caused a broken hip. Although it was a clean break, the injury required four months of physical therapy.

Now Gordon resides at Cades Center in Humboldt. Gordon uses a wheel chair and that does not slow her down. She moves around then center visiting with friends as well as joining in other activities.

Gordon still likes to have her nails done. Last Thursday, she had them painted a vibrant purple. When asked if she was fond of the color purple, she said, “I just felt like changing it up.”

A big party was planned for Sunday, a day when her family could join her in this momentous celebration. Gordon felt pretty certain that all of her family would be there with the exception of maybe one brother, who lives in Illinois.