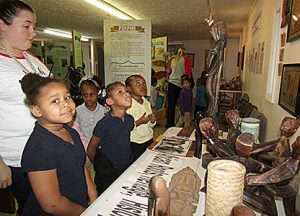 Last week Humboldt students had the opportunity to visit the Tom and O.E. Stigall Museum and Ethnic Library. This was an after-hours field trip for many students. On Tuesday students from grades second and third visited as did students from grades fourth and sixth. Wednesday kindergarten and first grades visited the museum.

Speaking to the students on Wednesday were Jerry Marable and Mayor Marvin Sikes. Jerry Marable welcomed the students and explained the panels they would see. Mayor Sikes gave a brief history of the museum and its founder, Rev. J.T. Freeman.