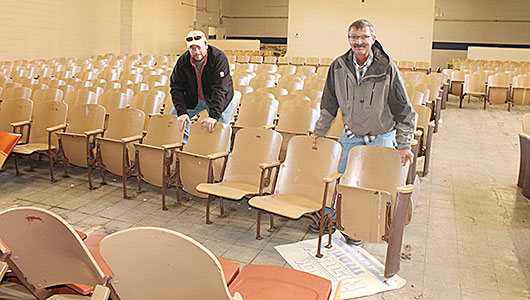 Another phase of renovations to the schools is underway. This part of the project includes renovating the auditorium at the shuttered Humboldt Jr. High building.

The auditorium renovation is just one part of the $4.5 million project with Humboldt City Schools. The majority of the funds were used to renovate Stigall Primary School. Humboldt Jr./Sr. High School had upgrades to the football stadium and basketball gym.

Lashlee-Rich’s Bryan Parkhill is serving as project superintendent and oversees every aspect of the renovations. Parkhill said the plans for the auditorium were approved by the fire marshal Thanksgiving week. Last week, demolition began.

Work has begun on the old band room that will be converted into a backstage area with a restroom and three dressing rooms. The carpet on the walls and floor has been removed.

Last week, the auditorium seats were on their way out. All the bolts anchoring the folding seats to the floor had to be removed.

Two big ticket areas in the auditorium will be removing the asbestos floor tiles and installing a sprinkler system. With these big projects, Parkhill was hesitant to offer a timeframe when work will be completed.

Many people are hopeful to have the auditorium ready for the Strawberry Festival. Parkhill said he would love to have it ready then but with so many variables like the floors, sprinklers, fire alarms, HVAC systems, lighting and inspections, at this point he could not offer a completion time.

With the old seats, the auditorium would hold just under 500 people. The new plan calls for 552 seats, six of which are handicap designated. The windows will be covered with sheetrock walls on the inside and metal coverings on the outside. The interior concrete block walls will get a fresh coat of paint. A new track and tile ceiling will be installed with new LED can lighting.

In the back of the auditorium, crews will construct an audio/visual booth for the technical equipment.

The hardwood floors on the stage will be revitalized by sanding, staining and sealing, which will save a nice chunk of change as opposed to tearing it out and installing new hardwood flooring. New LED lighting will be used on stage. Howell said there is money in the budget for stage lighting but exactly what type of lights will be determined later.

Since the auditorium was first built, it only had radiator style heating, which was never efficient and hard to regulate. Last week, the old water source heating system was dismantled and removed. The auditorium was never air-conditioned. That will change when two 25-ton HVAC units are installed to heat and cool the room. The units will be located outside on the left hand side of the auditorium. Parkhill said he plans to cut the holes in the wall this week for the air duct work.

All new exterior doors are part of the plan. The front porch and steps will remain but the sidewalks in front and in the back will be replaced. The rear sidewalks will be reconfigured.

New storm drains will be installed, as well as a new electric panel to handle the extra load.

In the 50s and 60s, the auditorium was among the best in the area. Over the years, wear and tear, and becoming more and more outdated, the once glorified facility had seen better days.

Once the renovations are complete, the auditorium will once again be something Humboldt can be proud of. Theatre, plays, pageants, concerts, you name it—the auditorium will thrive again as a venue to draw people to the Strawberry City.