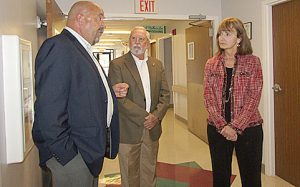 Speaker of the House for Tennessee, Beth Harwell, was in Humboldt last Friday. Part of her visit took her to A Mother’s Love, a Humboldt facility for pregnant women who are addicted to opioids. Harwell also spoke to Humboldt Rotarians during lunch.

Beth Harwell was first elected to the House in 1988. In 2011 she was elected Speaker of the House, making her the first woman to serve in the top leadership position in Tennessee history.

In January of 2017 she created a seven-person task force to take on the state’s opioid and painkiller crisis. She is taking seriously the crisis at hand and learning what can be done at the government’s level to put a stop to this devastating addiction and the complications that come with it.

A Mother’s Love, a 12-step faith based, medicine assisted program, enrolled their first client in September 2017. Women from all across the state are welcome at A Mother’s Love, where the opioid addicted pregnant woman can, if admitted in time, be weaned off of the drugs she uses and the baby will born clean.

“Getting them in here in time is critical,” stated Richard Barber, executive director of Aspell Recovery.

Once the baby is born at Jackson General Hospital, the baby and mother are welcome back to A Mother’s Love for an additional stay of 60-90 days with wrap around services once they leave. Harwell believes in the work the organization does.

“This is key,” she said, “because evidence points to the fact that 30 days is not enough. I believe that local, community programs will turn the tide.”

Harwell believes A Mother’s Love could be a model for pilot programs across the state.

“A bed here is expensive, but not as expensive as a bed in prison,” she noted.

Harwell said that Tennessee has already reduced the number of prescriptions being written. Sadly though, the number of newborns being born addicted is on the rise.

Because of the work done by the task force, Harwell believes that new legislation will be introduced in January.

Harwell, who is running for governor, said that the next governor will have to deal with the opioid crisis in Tennessee.

“We did not get into this situation overnight and we won’t be able to get out of it overnight,” Harwell said.

State Representative Curtis Halford is member of the seven-person task force assigned by Harwell to delve into the opioid crisis in Tennessee.

While speaking to Rotarian, Harwell focused more on issues going on at the Capital in Nashville and the positive condition Tennessee is in financially.

“The speaker’s job is to keep everyone heading down the same path,” she said of her duties overseeing the General Assembly. “I’m very impressed with the quality and integrity of people serving.”

Harwell asks her fellow state representative to consider three things before casting their vote— a “litmus test” as she called it. First on the list is ask if it will increase the budget.

“Tennessee has a balanced budget,” Harwell explained. “That is the best gift we can give our taxpaying citizens.”

Next is to consider, is it make it easier to do business in Tennessee?

“Tennessee is on fire—companies are wanting to locate here,” she noted. “Not having a state income tax is huge when attracting business.”

The third thing she asks the representative to consider before voting, does it continue to move us forward in education?

“We have to prepare,” Harwell said. “Our next generations must be educated and trained, and be a quality workforce.”

Harwell wrapped up her talk by praising State Representative Curtis Halford, whom she called grounded in the community. She told the club members that she is proud of the way Halford represents the people in his district.