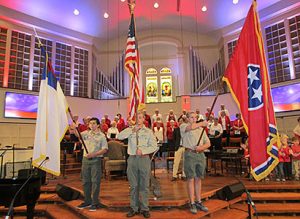 PRESENTATION OF THE COLORS – Boy Scout Troop #4031 of Lexington presented the colors at last Friday’s Veterans Day program held at The Church of Sugar Creek. The program was presented by Humboldt Exchange Club and the Gibson County Carl Perkins Center.

Last week Humboldt residents had many opportunities to thank the Veterans of our community.

A flag folding ceremony and a donation of 12 turkeys to the TN State Veterans home by the American Legion Post 77 was held Monday, November 6.

Robertson was introduced by Humboldt Exchange Club president, Elna Blankenship. Blankenship explained how, while on vacation in Florida, a chance encounter with Robertson was the catalyst for his arrival in Humboldt, Tenn. She announced that Robertson is the author of “A Love Beyond Explaining: An Orphan’s Journey from Rice to Grits.”

Robertson humbly took the floor and immediately said, “Thank you to all veterans.” He explained that he was picked up from the streets of Saigon, Vietnam and placed in an orphanage between the ages of six to nine months. He remained in that orphanage, named An-Loc for three to four years. The vagueness of these details indicates, as he pointed out, that he is unsure of his birthdate and therefore his exact age.

Living in the orphanage are the only memories he has of his younger years. But, he does have memories. He remembers the American soldiers that worked to bring electricity and plumbing to the orphanage in which he was living.  He remembers the sounds of the Hueys as they constantly flew over his home that he shared with 400 other orphaned children. Robertson fondly recalls the day the sound from a Huey seemed to linger over the orphanage. When it was investigated, it was a Huey hovering over the building and a soldier dressed as Santa Claus jumped from the helicopter with a sack full of toys for the orphans.

Robertson then fielded questions from the audience but promised to keep the rest of his story for the Veterans Day program to follow on Friday.

Brad Ballentine, Gibson County Veterans Services officer, spoke briefly to the group. His office is on the second floor of the courthouse in Trenton.  He sees veterans and assists them in claiming benefits due to them on a case by case basis. Ballentine served in the military for 29 years.

Manuel McKnight announced that the Gibson County Association of Veterans, Vietnam Veterans of Gibson County was started last year. They meet the last Tuesday of every month except December, at 7 p.m., at the Agricultural Building on Manufacture’s Row in Trenton. He emphasized that all veterans are welcome and that there is interest in an associate group for spouses.

Thursday’s third annual Humboldt Community Veterans Day Celebration, held at The Church at Sugar Creek, did not disappoint. Each year the program is presented by the Humboldt Exchange Club and the Gibson County Carl Perkins Center. This year’s celebration was dedicated to Vietnam veterans. At 9:30 a.m., a tribute video was played which showed pictures of veterans from the area.

At 10 a.m., the program started with a welcome by pastor Rob Harris and Callye Norsworth.

The presentation of colors was performed by Boy Scout Troop #4031 Lexington, under the leadership of Don Eubank.

Children from The Church at Sugar Creek were presented with American flags by local veterans and Humboldt Parks and Recreation. The children then led those in attendance in the Pledge of Allegiance. Jessie Yarbrough sang the national anthem. Invocation followed, given by Dave Burnett, Sargent U.S. Marines. The “SonShiners,” under the direction of Kevin Hamilton, led a sing-along of patriotic medleys. Children from Stigall Primary school played bells to the tunes of patriotic music and East Elementary school students sang patriotic songs as well. Both school groups were led by Stephen Watson.

As Humboldt Jr./Sr. High School band members, under the direction of Heather Glenn-Hoekstra, played a patriotic medley, there was a recognition of veterans by branch of service and by Vietnam era. Next, HJSHS students Nicolas Johnson and Destric Johnson had their poem and essay, respectively, ready by Manuel McKnight and Tony Williams.

Robertson began his portion of the program by playing a video that helped explain his story. His story did not end with the orphanage in Vietnam.

Betty Tisdell, an American woman, became aware of the plight of orphans in Saigon. She went to great lengths to send supplies and food to these children.  When it was certain that Saigon would fall, she knew she had to act to free those children from certain death. She arranged for 219 of them to be airlifted out of Vietnam and brought to America. All 219 of those children were adopted into American families.

Robertson remarked that he did have opportunity to know Tisdell. He was able to return to Vietnam in 2005. He saw first-hand that it is still a third world country.

“I realized that I was blessed to have made it out alive,” he said.

Robertson went on to say that he has wondered how he could repay all the different people who played a part in his life. His answer was gratitude. Living a life of gratitude is what he believes is thanks to the world.

Robertson’s American family is from rural Alabama. He went from living among the sounds of war in an orphanage of over 400 children to having a room of his own. He remembers not being able to grasp the abundance of food that America has. He would hide food in his pillowcase in his Alabama home and eat it in the middle of the night. When his mother found him with it one night, she told him, you are in America now. You never have to worry about food again.

“Tapps” was played by HJSHS student Michael Harvey. The closing prayer was led by Emma Lindsey.

The veterans were invited to Humboldt Jr/Sr High School to eat lunch and stay for the program at which Robertson spoke again. 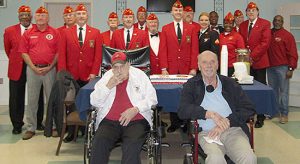 In addition to other activities, at 2 p.m. the Marine Corps 242 birthday was celebrated at Tennessee State Veterans Home, led by the Marine Corp League Detachment #735 of Jackson. Bryce West, Commandant, said that traditionally, Marines pause to observe their birthday by sharing a cake, and usually a holiday meal. The first piece of cake, as is customary, was given to the oldest Marine present. Friday, that piece of cake went to John Winzler who was born February 5, 1918. As is customary, Winzler passed the piece of cake to the youngest Marine present, who was Charlie Allison, born February 13, 1938.

The passing of the cake piece is symbolic of the way the Marines nurture and lead the young Marines that will fill their ranks and renew their Corps. It is a further testament to the way the older Marines care for the younger Marines before they look to their own needs.