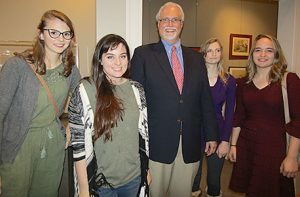 BELLWETHERS 2017 WINNERS – The Bellwethers 2017 exhibition winners were announced last Tuesday at the West Tennessee Regional Art Center. Winners along with the juror are (from left) are Aubrey Kurt, Holly Richmond, Jim Zimmer (juror) and Rachel Melton.

Bellwethers 2017 is now on display at Humboldt’s West Tennessee Regional Art Center (WTRAC). Bellwether is defined as an indicator or predictor of something. It can also be defined as leads or indicates trends. Collegiate art is precisely that – a predictor and/or leader of trends in art.

Last Tuesday was the public awards reception hosted by WTRAC’s director, Bill Hickerson, who had carefully arranged and displayed the art in the downstairs primary art gallery.

Students were invited to participate in Bellwethers by faculty members and open online application. Some student artists ship their work to WTRAC while those who live closer personally drive it to be displayed.

The initial jurying was done electronically and thus pieces were chosen for display. Juror Jim Zimmer, executive director of Custom House Museum and Cultural Center in Clarksville, Tenn., arrived early last Tuesday to see the pieces in person for the first time and to judge and select winners.

“It is a joy to take a look at the work being done at this level,” remarked Zimmer.

He explained the judging criteria used are craftsmanship and the way it is presented. He determines if the artist had taken chances and pushed themselves.

Winners from among the 27 displayed works of art were announced in both 3D and 2D art with awards going to honorable mention, second and first places.

Organized 15 – 16 years ago by the University of Tennessee at Martin’s Department of Visual and Theatre Arts, Bellwethers (formerly known as Artists of the 21st Century) is displayed annually at WTRAC. The exhibition is open to art students enrolled in a visual arts program at a two or four year institution in Tennessee and the surrounding states of Alabama, Arkansas, Georgia, Kentucky, Mississippi., Missouri, North Carolina and Virginia. This year’s exhibition opened October 24 and will be on display until November 21, 2017. 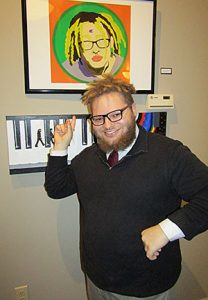 YOUNG ARTISTS – Isaac Avery Jones (above), a 2016 graduate of Milan High School and sophomore graphics design student at the University of Tennessee at Martin, was chosen to display his piece “Medusa Lives in New York” at the Bellwethers 2017 exhibition. Aubrey Kurt (right), a senior art therapy major at Union University, received honorable mention for her piece “Fluted Teapot” in the 3D category of the Bellwethers 2017 art exhibition at WTRAC. 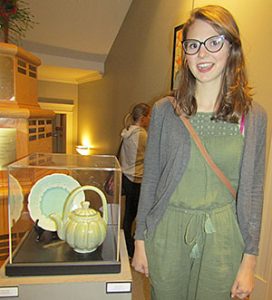