The Rutherford Mayor and Board of Alderpersons were all in attendance for the regularly scheduled city council meeting October 16. Mayor Robert “Bob” White presented the board Police Chief Adam Branch’s timesheet, noting that of 221 days, Branch had been late to work 62 days. He also noted that Branch has applied leave under the Family and Medical Leave Act.

“As mayor I do not like his work habits,” White said

Alderman Van Greer said, “I sympathize with his position, but these hours are going to blow our budget out of the water.”

White read from Section 4 of the personnel manual: “excessive tardiness is regarded as sufficient reason for termination” and went on to say it’s in the hands of the board in determining the next course of action.

“I don’t want to terminate Adam, and I don’t think the board wants to either,” he said.

Alderman Jeff Emerson asked Branch if changing his work hours from 8 a.m. to 4 p.m. to 9 a.m. to 5 p.m. would help, and Branch said he thought it would. White said he would work out the changes.

The board discussed other overtime concerns.

White said, “Water and Sewer operator Eddie Watkins is doing a super job with the water plant. We have a problem though. Eddie is salaried, but on his time sheets he is two to six hours over on his time. Eddie said he has over 150 hours of comp time.”| According to Emerson, the city does not give comp time to salaried employees. White said the personnel manual is in agreement with Emerson.

City Recorder Dawn Smith said, “If you are a hourly worker, you can get overtime, but salaried employees cannot get overtime but they can get comp time for any time worked over your regular 40 hours. This is according to MTAS (Municipal Technical Advisory Service).”

“I would like to see him put on the hourly rate instead of being salaried,” he said.

Emerson made the motion to pay Watkins the hourly rate at 40 hours per week. Greer seconded the motion. The board voted and approved it.

Emerson said he wants all salaried employees to go on the hourly rate due to the payout of $30,000 the city had to make to the former police chief. Emerson continued, “As Barney Fife would say, we’re going to nip it in the bud now, so the city won’t have to go through that again.”

White also said the city is paying someone in Bradford $5,000-$6,000 a year for sewer testing. Watkins is qualified to do the testing. White asked Watkins to get an estimate on the costs the city would incur to buy the chemicals and hardware needed for the tests.

Alderlady Annie Edwards weighed in saying, “It’s very expensive, more like $50,000 just to get everything we need.”| She said that the sewer supervisor of Dyer, Willie Caton, had showed her just how expensive all the equipment would be. Dyer does its own testing.

White said the school had given a small house to the city that he wants to move to the water plant to use as an office for Watkins. Watkins noted that the building is old. He said all his paperwork is federally regulated. When it goes to an outside building, it’s not federally regulated. He said a building like this would be easily broken into. In order to bring it up to standards, it would have to be in a federal building.

The city hall is federally regulated, said Watkins. White said city hall is not a federal building and asked Watkins to provide proof in writing. Watkins said he needs that building for storage.

White said he advertised in the newspaper for a maintenance supervisor. He appointed a committee of Alderman James Roach, Alderlady Broeck Horner and Alderman Jeff Emerson to look over the applications and conduct interviews for the position.

Branch said the police department is experiencing lots of problems with its phone lines and internet going down. Officers let the city recorder know, and she calls the trouble ticket in. The phone is under Spectrum, but the internet is under Whisper.

Watkins reported on the fire hydrant in front of the post office. There is a plate on the bottom of it. This fire department does not have a valve to shut the water off to it. It flows at over 100 gallons per minute. It has a quote to put in a valve inset to the hydrant. The city will do the digging, and GNC will do the rest. The city will also have to do the concrete around it. The cost is $3,381. The valve inset will go between the hydrant and the main. The purchase for the work order was approved.

The city did get the water grant for the new wet-well for $200,000 that applied for about six months ago. It’s the storage for the water that goes to the water tanks. It’s before the filters so it’s considered a wet-well.

Watkins said the ditches around town are being cleaned. It’s a slow process, but headway has been made. 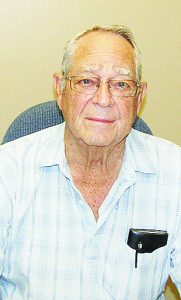