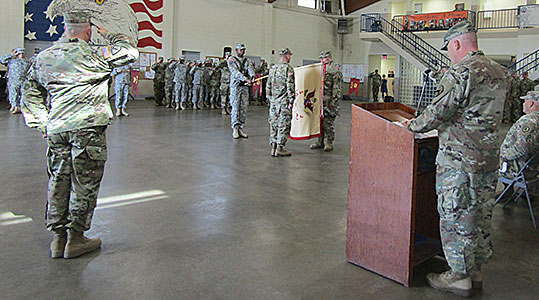 GUARD UNIT DEPLOYED – The casing of the colors and deployment ceremony was held at the Humboldt National Guard Armory last Saturday. 36 members of the 30th Combat Sustainment Support Battalion were bound for Fort Hood last Sunday. From Fort Hood they will be deployed to Afghanistan for a nine month mission in support of Operation Freedom Sentinel.

History often repeats itself. This was a common refrain heard last Saturday as the 30th Combat Sustainment Support Battalion gathered at their National Guard headquarters in Humboldt, Tenn. Only seven short years ago, July 2008, the battalion performed their casing of the colors ceremony in preparation of their deployment to Iraq.
This beautiful Saturday afternoon, the casing of the colors ceremony was once again performed, this time in preparation for their departure to Afghanistan. Thirty-six members of the battalion will travel to Afghanistan, where there are approximately 11,000 soldiers in support of Operation Freedom Sentinel. The troop traveled to Fort Hood on Sunday and will be deployed from there to pursue their nine-month mission.
The casing of the colors ceremony is held to signify the closing of their current assignment and their preparedness for the next mission. The colors (flags) are rolled in a ceremonial way and covered. They will not be uncovered until they begin their next mission, which this time will once again be on foreign soil.
Battalion Commander Brook Grubb, a 29-year military veteran, explained that the National Guard works both state missions, which can include floods and other natural disasters, and federal missions such as the one they will soon embark upon.
The National Guard’s 30th Combat Sustainment Support Battalion was activated and federalized September 1, 2006 and is comprised of soldiers from East, Middle and West Tennessee.