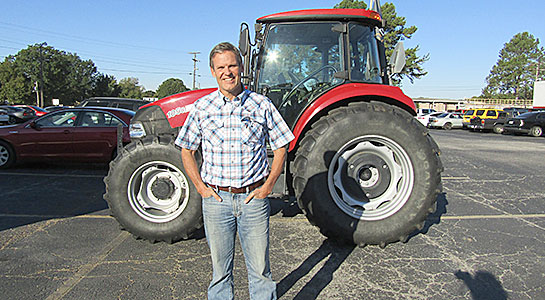 CANDIDATE – Bill Lee, gubernatorial candidate for the state of Tennessee was in Humboldt last week. He traveled 758 miles of rural Tennessee by tractor to bring attention to the “deep challenges” in economic development and workforce development. Lee began his tour in Mountain City August 16 and wrapped up in Memphis on October 20.

Bill Lee, republican candidate for governor of the state of Tennessee, came rolling into Humboldt last week in his tractor, a tool he is using to draw attention to the importance of the special needs of rural Tennessee.
“Rural Tennessee has deep challenges,” said Lee. “I believe we may be one generation away from losing a way of life.” The tractor helps bring attention to the challenges in economic development and workforce development.
As of last Thursday, Lee was on the last leg of his tour of Tennessee by tractor. He was scheduled to wrap up on Friday in Memphis. This trip logged him 758 miles, 38 hours and 33 stops.
When he first announced on April 24, he kicked off his campaign with a 95 counties in 95 days tour by RV.
The Humboldt stops included Luckey farms and Bondgards where the Humboldt Chronicle caught up with Lee, a self-proclaimed non-politician. Bongard’s is in the midst of a $32 million expansion. Plant manager, Steve Davenport along with production manager, Mary Brown, had a lot of information for Lee about the job market here as well as the availability of skilled laborers.
Lee is a fourth generation cattle farmer as well as businessman who employees over 1,200 HVAC and electrical personnel.
When asked how a non-politician becomes a gubernatorial candidate, Lee’s story is compelling. He has never held public office. He has however faced tragedy that changed his life-course.  He lost his first wife in a tragic horse accident.
“That experience,” said Lee, “changed my perspective.” 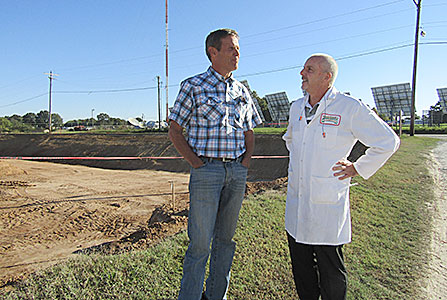 VISITS BONGARD’S – Candidate for governor Bill Lee is photographed here with Bongards plant manager, Steve Davenport. As they viewed the construction site at Bongards they discussed, among other things, the $32 million dollar expansion that is in the works there. Lee is concerned with the labor market here and can see the need for skilled laborers.

He became heavily involved in nonprofits, serving with his family. As he worked harder in these endeavors and became more deeply involved, opportunities arose that continue to shape Lee.
“I mentored a boy in the inner city,” continued Lee.
That brought him to recognize the needs Tennessee has in the area of education. He began devoting time to prison ministry. Mentoring an inmate there shed light on Tennessee’s need for changes to crime policy.
With his growing deep desire to serve, Lee knew he had to do more and in a way that would have greater impact. He is now running for governor of the great state of Tennessee.
If you would like to know more about Bill Lee, visit his website BillLee.com where you can view his Roadmap for Rural Tennessee.