Milan’s ‘Storytellers’ look back on the good old days

Milan has a rich history, full of colorful characters and events so surreal, you’d have to have been there to believe them.
Luckily, there are a few of those folks that are still kicking, and they always have a story to tell.
Jerry Flippin, Mitchell Wright and Bud Beasley have lived in Milan for close to 90 years. The trio have seen people and businesses come and go, but while some may have been forgotten to the winds of time, the highlights of yesteryear continue to live on in their sharp minds.
Mr. Wright, one of Milan’s most prominent African-American citizens, didn’t have to witness history. He made it. 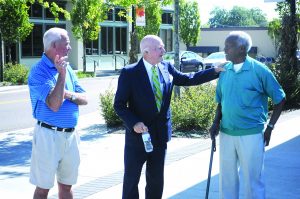 MILAN’S STORYTELLERS (from left) Bud Beasley, Jerry Flippin and Mitchell Wright regale filmmaker Jodi Heavner with a story about the Milan Zoo while they film a segment for the Hey Milan! YouTube series. Photo by Logan Watson.

Wright moved to Milan from Lavinia at the age of three, and became the first black business owner in Milan, purchasing the former Jones Exxon station in 1972, where Mega Mart is now located. Wright was also an avid basketball player in high school. His love of the game led to a long and storied career as a referee for 35 years, where he officiated 10 state tournaments, as well a national tournament, and met future athletes Ed “Too Tall” Jones and Olympian Wilma Rudolph.
Wright was also the the first African-American to receive the Milan Chamber of Commerce’s “Man of the Year” award.
Mr. Beasley was born in Milan in 1927, where he served for nine years as Fire Chief, in addition to operating car dealerships from 1946 to 1979.
“Being Fire Chief was one of the best jobs I’ve ever had,” Beasley said. “I consider myself halfway retired at 90.”
Mr. Flippin, one of the most notorious cards in Gibson County and a practicing attorney for 64 years, was also born in Milan in 1927.
“Main Street has always been a big part of my life,” Flippin shared. “I was born on Main Street. Even while serving in the state House and Senate, I’ve always been anchored down here, and happily so.”
The three men were brought together by Jodi Heavner and Brandy Kemp, along with Mayor B.W. Beasley, to help bring their stories to a new generation through Kemp and Heavner’s YouTube channel, “Hey Milan!” The group hopes to build a bridge to the past using the sharp minds and wit of Milan’s greatest generation.
The three men met recently at City Hall to begin filming segments for the series, then walked around Downtown Milan, pointing out the locations of some of the more colorful establishments and events, including Milan’s very own zoo.
“It had a bear and half a dozen coyotes,” laughed Mr. Flippin. “One time they all escaped, and everybody just took cover. The bear eventually came back. I guess he got hungry.”
In addition to the zoo, the trio talked about Jimmy Fields’ furniture store and some of the “local color”, including the Big House, which the group will discuss in future episodes.
“There were a lot of characters in Milan,” said Mr. Flippin. “There wasn’t much else to do back then but be a character.” According to Flippin, business owners along Main Street played tricks on one another, including several involving Mr. Fields’ dog. There was also a bowling alley, which was built long before the ball return became commonplace. “They didn’t have those machines yet, so they had to get a bunch of kids to set all the pins back up. You just had to stay out of the way of the balls.”
Mr. Beasley also talked about the Volunteer Fire Department and his first experience driving the fire truck.
“All of the volunteer firemen worked downtown, so any time there was a fire, we all wanted to race to see who would drive the truck,” said Beasley. “The first time I got there, I was so excited about driving the truck that I forgot to unhook the trickle charger, and wound up dragging it behind us. Even today, when I hear a fire truck go by, I want to follow it.”
The men have many more stories in them, which they and the Mirror-Exchange will share as the series progresses. Links to the “Storytellers” episode for Bud Beasley as well as the City of Milan’s episode of Hey Milan! can be found below.

We would like to thank Brandy Kemp and Jodi Heavner for partnering with the Mirror-Exchange to bring our readers these great stories. Make sure to check out the rest of their videos on YouTube!