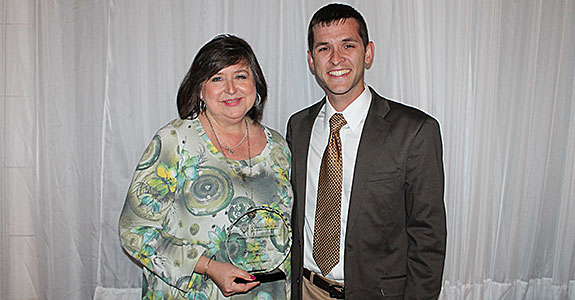 CITIZEN OF THE YEAR – Janeice Frisbee was awarded the Citizen of the Year award at this year’s Humboldt Chamber of Commerce Membership Banquet. Frisbee received a standing ovation as her name was announced and she walked to the podium to accept the award. Chamber President Dustin Twyman presents the award.

Hundreds of Humboldt chamber members, guests and dignitaries enjoyed a wonderful evening at the annual Humboldt Chamber of Commerce Membership Banquet. This year’s banquet was held at The Venue at Twin Oaks last Thursday evening.
The banquet included dinner and a silent auction followed by the awards ceremony.
Chamber president, Dustin Twyman, and chamber executive director, Amanda Love, co-emceed the event.
As guests arrived the silent auction was open. There were dozens of items up for bid this year.
The buffet style dinner was served inside the 100-plus year old antebellum house and guests dined in the adjoining pavilion where the banquet was held. Rob DeLoach offered the invocation.
As the program began, Love introduced the special guests in attendance. She then gave a brief overview of the chamber, it’s focus and future plans. Love stressed the chamber’s new motto, growing opportunity.
Love then recognized the chamber’s event coordinator, Anna Surratt, and membership assistant, Beth Culpepper, for all their hard work preparing for the banquet.
President Tywman acknowledged this year’s board members. Those members retiring from the board were honored with plaques for their service, although some were unable to attend the banquet. Outgoing board members are Shane Lynch, Ashley Culpepper, Bob Graning, Ben Sinclair, Laura Stepps, Janeice Frisbee and Barry Reed. 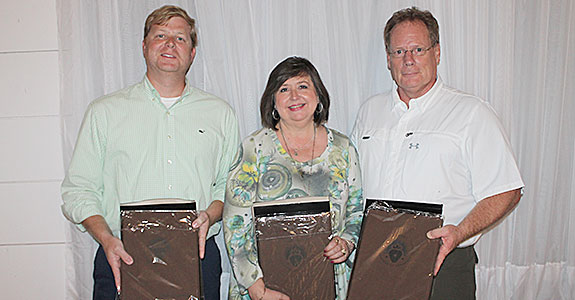 OUTGOING BOARD MEMBERS – Chamber of Commerce board members serve a 2-year term. Those members retiring from the board include (from left) Ashley Culpepper, Janeice Frisbee and Shane Lynch. Those unable to attend the banquet Thursday night were Bob Graning, Ben Sinclair, Laura Stepps and Barry Reed.

Next Twyman introduced past chamber president, Georgann McFarland and presented her with a plaque for her service to Humboldt. 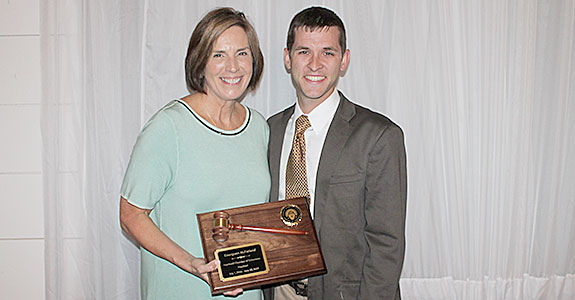 PAST PRESIDENT HONORED – Chamber president, Dustin Twyman, presents past president, Georgann McFarland, with a plaque during the chamber banquet last Thursday night for her commitment and service to Humboldt during her term as president.

Awards recognition was next on the itinerary as Love read a brief bio on the five award winners prior to presentations. Sponsors of each award had a representative make the presentation.
Large Business of the Year was the first award handed out. Gene Langley Ford was this year’s award winner. Owner Gene Langley accepted the award, which was presented by King Tire Company’s Curtis King. 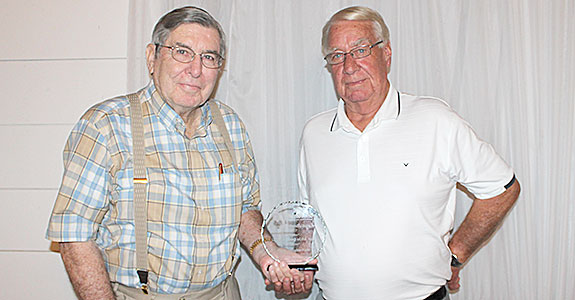 LARGE BUSINESS OF THE YEAR – Gene Langley Ford was selected as Large Business of the Year at last Thursday night’s Humboldt Chamber of Commerce banquet. Curtis King, owner of King Tire Company that sponsored the award, presents Langley (right) with the plaque. Large business award is for 15 or more employees.

Steve’s Custom Carts was awarded Small Business of the Year for companies with under 15 employees. Owner Steve Hardin was presented a plaque by Alex Smith on behalf of Humboldt Utilities. 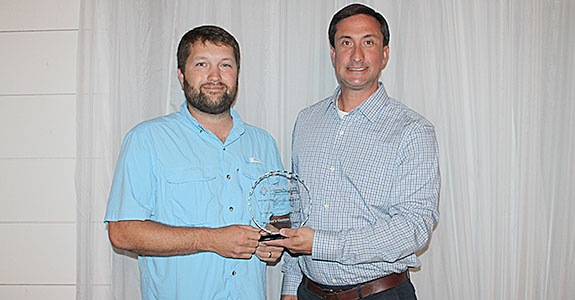 SMALL BUSINESS OF THE YEAR – The Small Business of the Year award at the Chamber of Commerce banquet went to Steve’s Custom Carts. Owner Steve Hardin (left) accepts the award from Alex Smith, general manager of Humboldt Utilities, sponsor of the award. Companies with less than 15 employees qualify as a small business.

The next award was the Emerging Leader of the Year. Ashley Culpepper took home the honors. Centennial Bank’s Laurie Gamble presented Culpepper with his award. 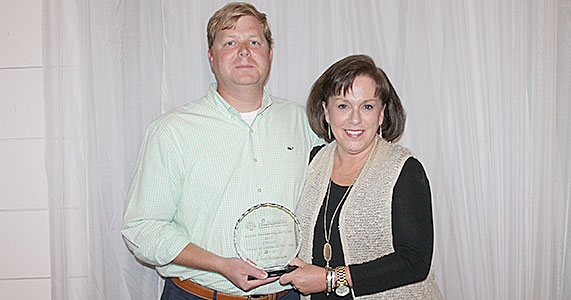 EMERGING LEADER AWARD – Ashley Culpepper (left) was named the Emerging Leader of the Year recipient at this year’s chamber banquet. Culpepper served as president of this year’s West Tennessee Strawberry Festival. Laurie Gamble of Centennial Bank, sponsor of the award, presents Culpepper with the plaque.

April Trimmer received the West Tennessee Strawberry Festival Volunteer of the Year award. Trimmer has served on several committee including Opening Ceremonies, Taste of Humboldt and Christian Concert, and assists in other festival events. Sam Blackwell, representing Simmons Bank and Simmons Insurance, made the presentation. 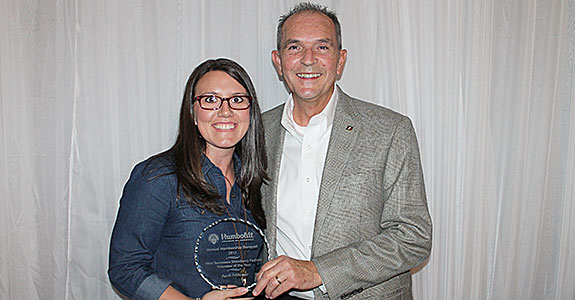 WTSF VOLUNTEER OF THE YEAR – The West Tennessee Strawberry Festival Volunteer of the Year award at the Chamber of Commerce banquet goes to April Trimmer. Trimmer has served on several festival committees and assisted at many events during festival week. Simmons Bank and Simmons Insurance sponsored the award. Sam Blackwell of Simmons makes the presentation.

Saving the best for last, the final award of the night was the Citizen of the Year award. Janeice Frisbee received the award to a standing ovation. Frisbee tried to hold back tears of joy as she accepted the award presented by president Twyman on behalf of Click1.net.
After the awards ceremony, festival president, Ashley Culpepper, officially passed the gavel to his sister, Melissa Swingler, who will serve as president of next year’s Strawberry Festival. 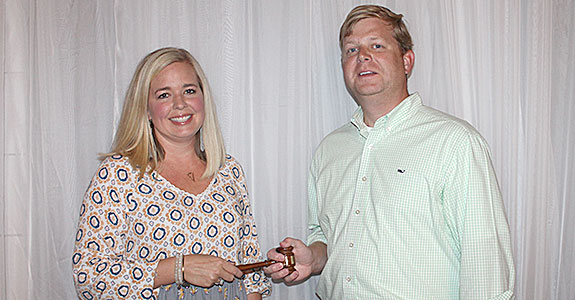 PASSING THE GAVEL – Ashley Culpepper, this year’s Strawberry Festival president, officially passed the gavel to his sister, Melissa Culpepper, who served as general chairman and will be president of next year’s festival.

In closing, Surratt announced all the winners of the silent auction.
Love closed out the banquet thanking everyone for supporting Humboldt, the Humboldt Chamber of Commerce and for attending the banquet.