The Dyer Mayor and Board of Alderpersons met on Monday night at Dyer City Hall. All board members were present except for Alderman Robert Johnson.

Concerned citizen Dorothy Bearce that lives at Peck’s Switch Cove addressed the board concerning traffic problems on her road. She said people speed in her subdivision, and she has seen people run off the road and into people’s yards. The problem rights itself whenever a police officer arrives on the scene.

The city can’t always provide police support so the use of neighborhood safety strips were discussed. The city has only one strip now. Mayor Chris Younger said the last couple of weeks, the problem appears to be getting worse. Bearce says the group homes in the cove are partly to blame. A lot of citizens walk out there for exercise and it’s becoming dangerous.

The red house at 170 N. Royal Street should be torn down, said Younger. “We need to move forward on this.”  Costs were discussed for teardown and removal.

Fire Chief Ryan Shanklin announced that Bryan Lewis, Casey Hall and Dalton Kilzer,  applicants for the Dyer Fire Department, are going through school now and doing well. The addition of these three will fill the roster of fireman needed for the city. The board voted to approved the new hires.

City Recorder Nathan Reed announced there is free utility board training the board will be required to attend. Some said they would not take off work from their regular jobs to do this. Reed said if they didn’t get the training the city would not be eligible for grants.

Wastewater superintendent William Caton said he budgeted $5,000 for painting the clarifiers at the sewer plant but the total cost is $5,300. The board approved for the $5,300. Randy Gregory and Steven Tucker replaced a valve at West College and Lee Street. There are several valves that need to be replaced in the city. Cost of the valve and sleeve is approximately $1,000. The board approved up to $1,000. Gregory said he budgeted to spend up to $6,000 to replace the windows in the water plant. This was approved..

The board also okayed payment to The Outhouse for $3,500 for wet well pumping.

On the second reading of an ordinance, restrictions on medium speed vehicles, like Gators and Rangers, were lifted. Now there are no restrictions as long as drivers comply with state law. 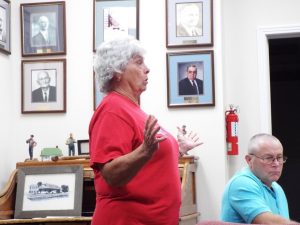