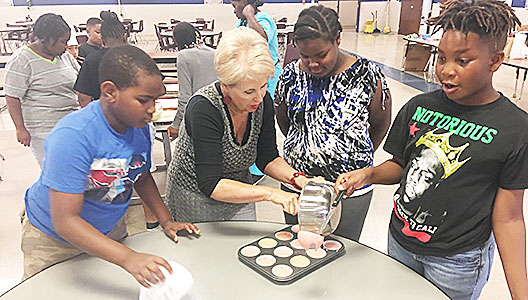 Even though it’s summertime and school is out, that didn’t stop approximately 100 Humboldt students from learning. Humboldt City Schools just wrapped up Summer Viking Academy.
Summer Viking Academy ran four weeks from June 5 through June 30, Monday though Friday. Classes were held at East Elementary School and at Humboldt Jr./Sr. High School.
Academy director, Emily Burleson, said this was the first time the camp ran four weeks. The longer camp was made possible by funding through the 21st Century Learning grant. Humboldt City Schools applied and received the $200,000 grant three years ago. Funding ended in June. The camp was free for all attendees.
Burleson put together a leadership team of teachers and volunteers to run Summer Viking Academy, which was for Humboldt students only, grades k-12. Site coordinators were Misty Lewis, Brittanie Doaks and Beverly Cannon. The team divided the kids in four groups—k-2, 3-6, 7-8 and 9-12.
The academy was set up into several different camps, each lasting one week. Camps included cooking, music, drama, dance, art, academic boot camp and STEM (science, technology, engineering, mathematics) and attendees selected which camp they wanted to attend each week.
Not only was there no registration fee to attend, campers also enjoyed free breakfast and lunch each day through the school system’s Summer Meals Program.
Burleson said cooking camp was a big hit this year. Cookie day, pie day, frosty day and appetizer day allowed kids to make treats and take them home at the end of the day. A Hawaiian luau was held the final day. Kids also were taught etiquette, how to set a table and manners, according to Burleson. Deanna Lorrick and Rebecca Jones split time leading cooking camp.
Stephen Watson, music instructor for HCS, led music camp. The camp focused on music from around the world.

DRAMA AND MUSIC CAMPS – Over 50 students participated in drama and music camp for grades 3-6 under the direction of Becky Reeves and Stephen Watson with the assistance of Brandi Martz, Erica Moore and Nancy Nicholas. They performed for their peers and teachers at the end of the week. The selections were from the play “At the Bandstand” including Splish Splash and fun 50s songs.

Drama camp was led by Becky Reeves. Music and drama camps partnered together with the help of Monola Patterson directing a musical play that included songs from the 50s.

At fitness camp, Samantha Ellis and Erica Moore taught to kids about nutrition, team building and fitness training. The kids enjoyed games that gave campers plenty of exercise. HCS’s Jennifer Roten also worked with campers for special activities.
Dance camp was instructed by Beverly Canon, with assistance from Tamiko Willis. The group of 10 girls practiced dance routines that will be performed during this coming school year and other functions. 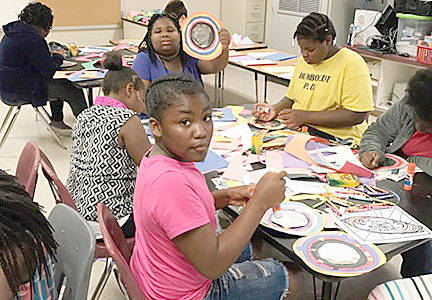 ART CAMP – Students in week 1 of Summer Viking Academy participated in Art camp focusing on art around the world.

Art camp had three instructors, Brandi Martz, Ashley Shelley and Octavia Shutes. Kids studies art around the world from Africa, India, Australia, Mexico and Canada. They painted watercolors, worked with 3D art, mosaics and made jewelry.
Academic boot camp only ran for two weeks but was a combination of learning and fun. Burleson said there were learning games that concentrated on filling in the summer slump while kids were away from the classroom.

STEM CAMP – Students in grades 3-6 participated in the STEM camp focusing on science, technology, engineering and mathematics. At the end of the week, the students participated in an escape room at East Elementary and were able to escape.

STEM camp was a multi-faceted class touching on science, technology, engineering and math, all while having fun. The camp was for the younger campers, kindergarten through 6th grade. They studied team building, computer coding, as well as making projects such as marshmallow catapults, water relays and a bridge made from index cards. They enjoyed a water bottle flip challenge, film canister rockets, hoop gliders, musical straws with different pitches and working with spinners. Kids kept a journal on their experiments, collecting data at each step of the process.
As a bonus in STEM camp, Burleson and her crew built an escape room. Campers were put into the escape room and had to find clues and solve puzzles in order to unlock the room. Burleson said the kids really loved the challenge.
In all, Burleson said Summer Viking Academy camp was a huge success.  She said on average, there were 95 campers each day.
Since the 21st Century Learning grant ended this school year in June, Burleson said based on funding, there could be two more years. Burleson said she hopes to continue having Summer Viking Academy for years to come.