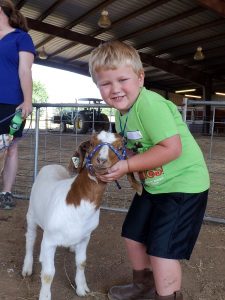 SIKES SHOWS OFF HIS GOAT -Mr. Mason Sikes learns how to take care of a goat during the weeklong camp.

The campers were between the ages of four through nine and attended from 8 a.m. to 12 p.m The five day camp was designed to give campers a hands-on learning opportunity.

Each camper took care of an individual goat for the weeklong camp and of course many of them named their goat. They learn how to wash, feed, water, groom, lead, give medications and much more.

Campers also learned the breeds and the parts of the goats. The eight to nine-year olds campers learned show day preparation, showmanship, show ring techniques and how to prepare for judges questions.  Other activities during the weeklong camp were games, singing, story time, and art and crafts.

On the last day of camp, each camper received a t-shirt and a decorated photo frame with a picture of him or her with their goat. The camp ended with each camper showing his or her goat in the Kid Camp Showmanship Show with awards given at the end.

The Gibson County FFA spokesperson said they appreciated everyone who helped make the first Kid Camp a success. “We enjoyed the opportunity to work with so many enthusiastic children,” he said.