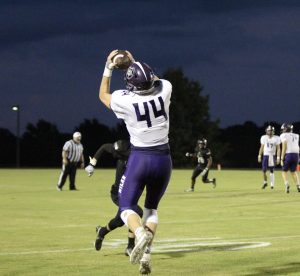 Milan’s Bladen DePriest (44) catches a pass against Liberty during a Week 4 football in 2022.

After Week 4, Parkins got a win back and only trails by four. Odom went 11-4, while Parkins went 12-3, picking Huntingdon’s win over Riverside to better Odom.

RANKINGS: Milan up to No. 4 in football rankings after Week 4

So here is what is happening in Week 5 in Gibson County and across West Tennessee:

A big matchup in the second week of region play as both teams come in undefeated and playing well. Lexington scored 28 points on the Tomcats, so maybe there is hope. (Note: Milan is 2-0 when Odom picks against them.)

The Indians haven’t scored a point this season, and South Gibson is coming off a shutout of Kirby. The Hornets’ defense will be ready.

Both teams are coming off an open week, so both should be well rested. This would be the biggest win in Teddy Pettigrew’s tenure with the Vikings, if they can pull this out.

This week should be an easy win for the Golden Tide. The biggest question is when coach Shane Jacobs will take his skill players out to keep them healthy.

South Side at Liberty