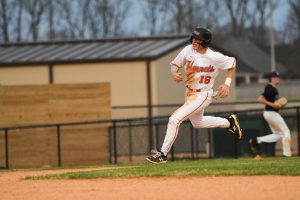 South Gibson’s Joseph Alford (16) runs to second base against Milan during a high school baseball game on March 21, 2022.

Well, Week 3 of the high school spring season is here, but there are few events going on in Gibson County as most schools are on Spring Break.

But there are still plenty of good action going on.

Middleton (4-1, 0-0 14-1A) at Peabody (2-3, 0-0) Baseball (2:45 p.m., Monday): A District 14-1A opener for both teams, and since both schools are on Spring Break, it will be an afternoon matinee. Peabody has played a tough early schedule against bigger schools, and this is a chance for the Golden Tide to get back to winning.  Game 2 is on Tuesday at Middleton at noon.

South Gibson (9-5) at Westview (4-2) Softball (5 p.m., Monday): The Lady Hornets are coming off a busy weekend with six games in the Southern Warrior Classic in Murfreesboro, including a 6-5 win over 2021 Class AAA runner-up Coffee County. Westview is an improved program that is trying to get back to the level of 12 yeas ago when it made the Class AA state tournament.

Huntingdon (1-5, 0-0 12-2A) at Milan (2-4, 0-0) Baseball (6:30 p.m., Monday): No easy entrance into District 12-2A play for these two teams that are used to fighting for spots in the district title game. Now that they are in the same district, they will battle each other to try and get to the region tournament. While both teams have losing records, don’t discount either. Milan is coming off back-to-back games against TCA an Hardin County, while Huntingdon has played programs like Scotts Hill, South Gibson and USJ.

Hardin County (7-2) at South Gibson (7-2) Baseball (6:30 p.m., Monday): These two are favored to meet up in the Region 6-3A championship, but there is lots of baseball to play before getting to that game. Hardin County finished runner-up in Class AAA last season and return Notre Dame signee Cooper Clapp and Memphis signee Seth Garner. South Gibson is coming off a successful weekend in the Final Flight Tournament as the Hornets finished runner-up.

Milan (0-4, 0-1 12-2A) at Huntingdon (9-2, 0-0) Softball (5 p.m., Tuesday): After losing to Gibson County in Week 2, the District 12-2A schedule doesn’t get easier as the Lady Bulldogs must travel to district favorite Huntingdon. Huntingdon won the Sarah Beth Whitehead Tournament in Week 1, shutting out Jackson Christian in the championship game.

West Carroll (4-3) at Madison (2-3) Baseball (4 p.m., Friday): Madison won its home opener over Bradford in Week 2 11-1. Now the Mustangs host a West Carroll team that has been on a rollercoaster but enters Week 3 on a two-game losing streak. If West Carroll can clean up the errors, the War Eagles can compete with anyone on the schedule.

South Gibson (7-2) at Covington (3-2) Baseball (6:30 p.m., Friday): Covington ended the Hornets’ season last year in the Class AA sectionals. While they are both in Class 3A this year, the two teams couldn’t meet until the state tournament. South Gibson went 3-2 last week with three of those wins coming in the Final Flight Tournament.