Humboldt not hit as hard as other locations across West Tennessee 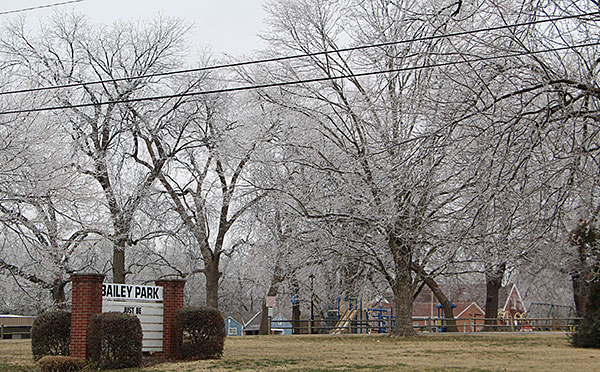 ICY TREES – Trees covered with ice like these at Bailey Park were familiar sights around West Tennessee last week when a mammoth area was hit with an ice storm. While some areas got hit harder than others, Humboldt fared pretty well when it comes to power outages due to falling tree limbs onto utility power lines.

Last Thursday morning, people woke up to find the area had been hit by an ice storm. Trees and bushes were covered with about a quarter-inch of ice.

Most of the day Thursday, rain fell in Humboldt keeping driving conditions good. But by Friday morning, the wet roads froze over with a thin glaze of ice. That did not stop many motorists from venturing out to work or other reasons for getting out of the house. Around 9 a.m. Friday, snow began to fall, quickly covering the ground. But it did not last long.

For the most part, Humboldt fared pretty well with the ice and snow. Humboldt Utilities General Manager Alex Smith said there was one major outage where approximately 200 customers were without electricity for about an hour. Icing on tree limbs falling on power lines was the culprit for the outage. Smith said there were less than 20 customers scattered out across the city that also experience power outages. By noon Thursday, everyone’s electricity was restored.

GM Smith said Brownsville got hit pretty hard and had requested assistance from other utility companies. Smith said they had a crew ready to go but the request for more assistance was called off after JEA sent some of their workers to help Brownsville.

With Humboldt having just a handful of outages, Smith contended it was because Humboldt Utilities is proactive in keeping trees trimmed away from their power lines. Humboldt Utilities has a tree-trimming crew working every week to keep tree limbs cut back a safe distance.

Gibson EMC did not fare as well due to the fact that their coverage area is enormous compared to Humboldt Utilities’ customer base. Gibson EMC has members as far south as Crockett and Madison counties and to the north, stretching into Kentucky.

Thursday afternoon GEMC reported 66 outages affecting over 2,800 customers. The largest area affected was around Bells where 1,000 homes and businesses were without electricity. By 6 p.m. Thursday, Gibson EMC had restored electricity to about half of the members with 1,141 customers still without power.

By mid-morning on Friday, Gibson EMC workers had cut that number in half again to less than 600.

Around 6 p.m. last Friday, Gibson EMC had all members back online.

Having power outages is no fun for customers or utility companies. Unfortunately, outages of some sort will happen, whether it’s weather related such as ice, storms, high winds or tornadoes, or due to some type of accident that takes out utility poles. But when it does happen, rest assured that utility crews will be on the scene, no matter what the weather conditions might be, as quickly and safely as possible to restore everyone’s electricity.

FALLEN TREE – This big tree near East End Drive toppled over Thursday morning, taking out a storage shed building in its path. Luckily, no one was hit by the massive tree. 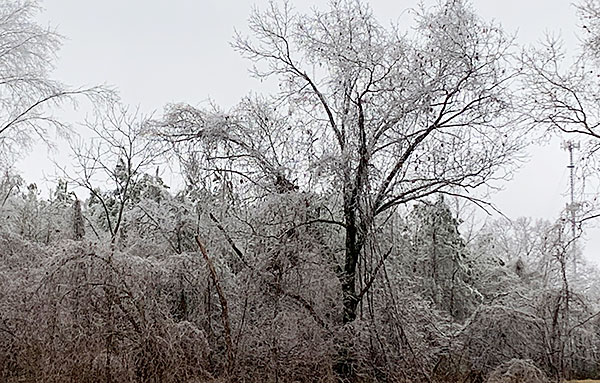 FROZEN LANDSCAPE – Ice covered trees, shrubs and practically anything outside in the elements were beautiful to look at but a nightmare for area utility companies that logged power outages last Thursday and Friday.