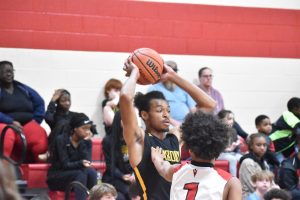 Peabody’s Derek Kee looks to pass the ball to a teammate against Bradford during a high school boys basketball game on Dec. 14, 2021.

Christmas is around the corner, but before we get to the holiday, there are a few days of basketball.
There are plenty of basketball games in the county on Monday and Tuesday, and Gibson County is hosting a pre-Christmas tournament in girls basketball, which ends Wednesday.
Michael Odom is now 16-8 (.667 percent) this season with his picks. He went 4-1 last week.
Check out the top games in Week 6:

West Carroll (2-3) vs. USJ (2-6) Girls at Gibson County (3 p.m., Monday): This is the first game of the Gibson County Pre-Christmas Tournament, and this might be the best matchup of the day. West Carroll has played a tough schedule with the losses coming against Bradford, Gibson County and Union City. USJ will have had 17 days off since playing Henry County on Dec. 3. No team in West Tennessee has played a tougher schedule so far than the Lady Bruins. These two teams matchup against Obion County and Evangelical Christian School on Tuesday.

Haywood (2-6) at Gibson County (11-0) Girls (6 p.m., Monday): This is Game 3 of the opening day of the Gibson County Pre-Christmas Tournament. Gibson County will be favored to win this one easily, but the Lady Pioneers will be tested more as during the next two days of the tournament. These two matchup with Dyersburg and Poplar Bluff (Mo.) on Tuesday.

Milan (5-1) at Peabody (8-2) Boys (7:15 p.m., Monday): Milan’s five-game winning streak will be tested against one of the top scoring teams in the area. The Bulldogs have played well defensively, but can they play well enough to contain Jason Hunt, DeMarkus Kee and Derek Kee. Milan will have to win the rebounding battle to have a chance in this one.

Bradford (3-6) at Humboldt (2-8) Boys (7:15 p.m., Monday): The Vikings got their first win of the season on the court with a win at home over Crockett County. Humboldt will look to ride that momentum into the Christmas break, which begins with a matchup against a Gibson County rival. Bradford’s young players have to avoid the nerves of going into a hyped atmosphere to try and get a win here.