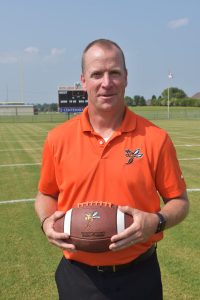 On Monday, Scott Stidham resigned his position as head coach of South Gibson football. He is leaving the Hornets to accept the head coaching job at another school.

Stidham has been the head coach at South Gibson since the program started in 2009.

Since then, South Gibson has a 77-47 record with eight winning seasons over the past 11 years.

Last season, the Hornets went 9-4, reaching the Class 4A quarterfinals for the second straight year. It was the first time that South Gibson has won two playoff games in the same season.

“I want to thank the players, coaches, administration, faculty and all of Hornet Nation for last 13 years,” Stidham said. “Thank you for allowing me the great honor and privilege of being your head football coach. South Gibson County High School is special, and it will always hold a special place in mine and my family’s heart.”

Stidham has had two sons to play in the football program with Nash Stidham finishing his senior season last month.