After no festival last year, excitement
this year is bigger than ever 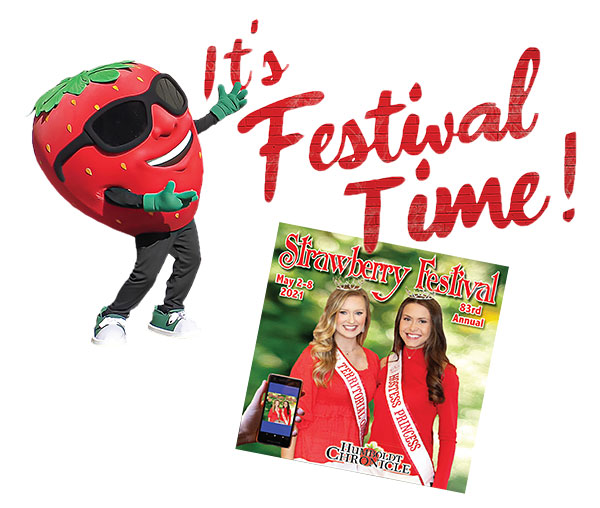 The year 2020 was no fun, plain and simple. COVID put a damper on the entire year. And we’re still feeling the hangover from last year’s pandemic.

But next week, that will all change when the 83rd annual West Tennessee Strawberry Festival will be back after canceling last year. Unfortunately, this year’s festival had to be altered a little with COVID still a problem in West Tennessee and around the world. Four events were canceled due to safety concerns.

The West Tennessee Regional Art Centers’ Art Exhibition, Recipe Contest, Taste of Humboldt and the Governor’s Luncheon had to be pulled from the line up this year but should be back next year.

Even without these events, there is still plenty to do throughout festival week. Make sure to see the Humboldt Chronicle’s Strawberry Festival Preview special section inside this week’s paper. It is filled with lots and lots of pictures and information from the last festival in 2019, along with this year’s happenings as well.

The schedule of events in on the back page of the Preview that list the dates, times and locations for all the events of the week.

Strawberry Festival week is the highlight of the year for Humboldt and the surrounding areas. There will be parades, beauty queens, carnival, concessions, barbecue, market, car show, live music, fireworks, horse show, hall of fame and other forms of entertainment to make for a fun-filled week. The Grand Floats Parade on Friday will feature the Mass Band made up of band members from five county high schools, Humboldt, South Gibson, Milan, Trenton and Gibson County. The band will be the parade finale and always a crowd-pleaser. The last Mass Band performed in the 2017 Strawberry Festival.

But perhaps the best part of the Strawberry Festival is seeing old friends who come back home to celebrate Humboldt’s claim to fame. There will be people up and down Main Street, day and night, throughout the week, visiting with friends and meeting new friends.

The first full week in May is a magical time for Humboldt, hosting the West Tennessee Strawberry Festival. Hats off to President Betty Langley, General Chairman Sherry Jo Smith and Humboldt Chamber of Commerce’s Amanda Love, Beth Culpepper and Syndey Lopiccolo for putting in hours and hours preparing for this year’s festival.

We’ll see you next week at the Strawberry Festival!

Strawberry Festival last minute change
The Humboldt Hall of Fame reception
has been moved to a new venue.
The reception will now be held
in the Humboldt Medical Center conference room
instead of First United Methodist Church
as originally planned.