The Gibson County Lady Pioneers softball team ended their history-making season Wednesday afternoon with a 9-3 lost to Houston Co. in the Class A State Tournament in Murfreesboro.

In the opening round of the state tournament, the Lady Pioneers’ game against Unaka was pushed back 45 minutes due to a thunderstorm and rain. The Lady Pioneers took the field as visitors with a light rain falling. Unaka scored two runs in the bottom of the inning and added a run in the second to take a 3-0 lead.

Gibson Co. had opportunities to score. In the top of the third inning, Macey Neal doubled to center field, but the shortstop made a great play on a hard hit line drive by Ashley O’Daniel for an out to end the inning. Maddie Neal doubled in the fourth, and Macey Neal singled in the fifth, but Gibson Co. couldn’t push a run across the plate.

In the top of the seventh with two outs, Macey Neal doubled down the third baseline, O’Daniel singled, and Maddie Neal was intentionally walked to load the bases, but the Lady Pioneers weren’t able to score, and Unaka got the 3-0 win.

Hitting for the Lady Pioneers were Maddie Neal 3-3 with a double and a walk; Macey Neal 3-4 with a double; and Ashley O’Daniel 1-4. Lexie Garner took the loss. She threw six innings, giving up seven hits and one walk and struck out five.

After the game Lownsdale said, “Being at the state tournament and what it took to get there was a great learning experience for everyone involved. Through the hard work and dedication of the girls this season, our program took a great step forward.”

The Lady Pioneer scored two runs to start the game against Houston Co. in a win-or-go-home game Wednesday afternoon. Macey Neal led off the top of the first inning with a single over the head of the shortstop then stole second base. Ashley O’Daniel laid down a great sacrifice bunt to move Neal to third base, and then Neal stole home to give Gibson Co. a 1-0 lead. Courtesy runner Molly Lamar scored on a double to right field by Zoey Neal to make it 2-0 Gibson Co.

In the bottom of the third, Houston Co. scored a run to cut the Lady Pioneer’s lead in half. Houston Co. took a 5-2 lead in the fourth inning, plating four runs.

Jaci White walked to start the fifth inning. Macey Neal reached on a fielder’s choice and went to second on a passed ball. O’Daniel reached on an error advancing Neal to third base with one out. Maddie Neal hit a sacrifice fly to left field to score Macey Neal to make it 5-3 Houston Co.

Houston Co. added four more runs in the bottom of the fifth inning to extend its lead to 9-3.

“The team’s goal this year was to make it out of the district tournament for the first time in 20-plus years,” Lownsdale said. “From Day One they believed they could do it and well surpassed that goal. As a coach, I couldn’t be prouder of this fun-loving bunch of softball girls and their accomplishments. Thank you again to everyone who supported them in their history-making season.”

The Lady Pioneers will graduate two seniors this season Ashley O’Daniel and Maddie Neal who led the team to an overall record of 24-12 for the 2018 season. 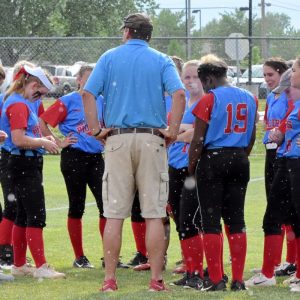