Dale Pugh, president of the GC Quarterback Club, welcomed everyone, and Coach Neal Papich gave grace before the meal.

The Quarterback Club served grilled pork loin and chicken, potatoes, and green beans to provide the team with an event to celebrate their hard work. Mark Gibson of Gibson’s Grill catered.

After the meal, cheerleaders coach Sally Baird took the podium and asked all of her cheerleaders to step forward so she could recognize them. Receiving the  award for Best Attitude was Sierra Lee. Madison Baird was named Most Spirited, and Julianne Turner got the Best Teammate Award. Fearless Flyer Award went to Sydney Yochum and Mia Grace Hardaway. Julie Allen received the Best Base Award, and Kyndal Pulley was named Tuff Stuff. Most Improved went to Adriana McAlister, and Courtney Cole received the Coach’s Award.

Coach Baird thanked the cheerleaders for all of their hard work over the 2017 football season.

Gibson County head football coach Cody Finley thanked his coaching staff for all their hard work and extra hours during the season. He also thanked the parents for a great group of kids to coach.

He added, “This past year’s record was not want I wanted it to be, but I’m looking forward to next year.”

Coach Finley started the awards presentation by reading the names of 2017 football players by grade and asked them to come forward to be recognized with a medal. 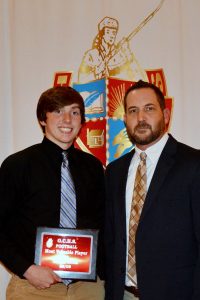