UT Martin is a NCAA Division 1 school that plays in the Ohio Valley Conference. Verbal commitment is when a player promises to attend a college while the coach promises to provide some sort of scholarship.

Neal is entering her second year playing for Gibson County where she has already set several new school records for hits (49), runs scored (33) and stolen bases (23) in a season.

She currently plays travel ball for the 16u Lady Jaxx under Coach Barry Jimmerson and recently played three years for the Blue Angels with Coach Rose Kaliisak and two seasons with Velocity for Coach Lownsdale.

Last season she was named to the Tennessee Softball Coaches Association All State Team and 14 A All-District Team. Additionally, Neal plays for the Lady Pioneerbasketball team and runs for the cross country team. 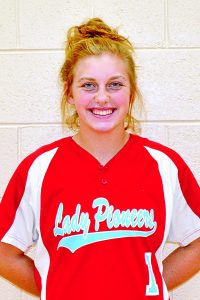