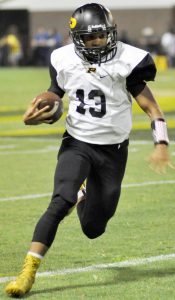 Halfway through the regular season football schedule, the Peabody offensive and defensive lines have lived up to their preseason billing as being the Golden Tide’s team strengths.

They proved that prediction true again by keying last week’s 42-0 Region 7-2A win over Halls. As has been the case in four-of-five games, the PHS lines controlled the game at the point of attack.

At Halls, the Tide offensive line paved the way for 324 total yards and 15 first downs and the defensive front stoned-walled the home team for 14 yards on the ground, 70 total yards and six renewed series.

The primary beneficiaries of Peabody’s blocking were sophomore running back Jarel Dickson, who rushed the ball 11 times for 104 yards and four touchdowns, and junior quarterback Courtlen Wade, who scrambled five times for 50 yards and one touchdown.

“We played really well defensively. We prepared well all week long. Halls is a good football team. They are better than what a lot of people think. I believe they are going to win some games this year. We played extremely well. I am proud of the execution, particularly on defense. We played well up front, and Jarel (Dickson) ran the ball hard again tonight, and Courtlen (Wade) played well at quarterback. So it was a good night for the guys and everybody played well,” acknowledged Peabody Coach Shane Jacobs.

Executing the offensive game plan, Peabody scored touchdowns on four of its six first half possessions. Wade scrambled to the Halls’ one-yard line before being tackled on the last play of the first half.

Contributing first half scoring were Dickson on an 11-yard burst through the left side to cap a three-play, 71-yard series; a seven yard blast up the middle to end a six-play, 48-yard drive; a three-yard plunge to culminate a nine-snap, 53-yard trek; and a 21-yard rumble to highlight a seven-play, 40-yard march. Zach Grooms kicked all four extra points for a 28-0 lead at halftime.

Peabody added two more touchdowns in the third frame on Jaime Hernandez’s pass interception and 90-yard return and Wade’s 19-yard QB keeper on a broken field run. Grooms tacked on both extra points for a 42-0 final.

“Halls has some good players. Their quarterback (Andrew Harris) does a good job of throwing it around. We felt like we could get some pressure on them with our guys up front, who are really good defensive players. Also, we were able to mix some coverages up on the back half. The guys did a good job of executing what we had practiced all week long. The pressure that we got up front from the D-Line was probably the difference,” revealed Coach Jacobs.

Wade completed three-of-six passes with one interception, and Halls went 6/9/1 in the aerial department. The Tide did not drop the football, and the Tigers retained their only bobble. PHS was penalized on nine occasions for 60 yards, and HHS was flagged twice for 20 yards.

“Dresden is on a 20-game winning streak right now and ranked No. 1 or 2 in the state. So it will be a lot of fun next week. I ask our fans to get there about an hour early and come out and support these guys in the pregame. Let’s be loud and let’s be excited to watch this team play Friday night. I guarantee our fans that our guys will come and play hard for them,” promised Coach Jacobs.