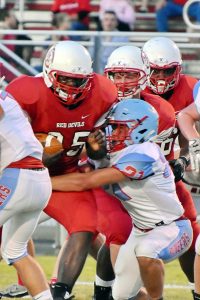 The Gibson County Pioneers football team lost to South Fulton High School this past Friday night, 22-13. To begin the game, the Pioneers were missing several starters due to injuries. In the first quarter, the Pioneer defense held the Red Devils scoreless with neither teams scoring in the first quarter. The Red Devils scored a quick touchdown with 11:14 left in the second quarter off a one-yard run from Scott. The two-point conversion was no good, giving South Fulton a 6-0 lead.

The Pioneers, on their first possession of the second quarter picked up three first downs behind runs by Ozzy Rico, Will Cantrell and Payton Lamberson and 14-yard catch by Donte Holder, but the Pioneers turned the ball over on downs. With one second remaining in the second quarter, the Red Devils scored a touchdown and converted a two-point conversion to take a 14-0 lead into the locker room at halftime.

To start the third quarter, the Pioneers defense forced the Red Devils to fumble on the first play of the quarter with Pioneer Rico recovering the football at the 37-yard line. The Pioneers moved the ball down field with nice runs from Lamberson, Cantrell and Rico to the three-yard line, but the Pioneers turned the ball over on downs. The Pioneers’ defense forced the Red Devils to punt and Gibson County started from the 39-yard line with 1:48 left in the third quarter. Lamberson completed a 37-yard pass to Holder to the two-yard line, followed by Holder’s two-yard touchdown pass from quarterback Cantrell to put the Pioneers on the scoreboard. Pioneer kicker Henry Todd made the extra point to make it 14-7 with 36 seconds left in the quarter.

The Red Devils added another touchdown in the fourth quarter to give South Fulton a 22-7 lead. The Pioneers didn’t give up from their 31-yard line. With 1:04 left in the game, quarterback Cantrell picked up a first down off an 11-yard run. Next, he completed a 28-yard pass to Caden Wylie to the 30-yard line. The Red Devils were called for a 15-yard penalty, moving the ball to the 15-yard line. With 42 seconds left in the game, Holder caught a 15-yard pass for a touchdown. The extra point was no good for a 22-13 final.

Junior Ozzy Rico was named the Pioneer Player of the Week against South Fulton. Rico is a junior running back and linebacker. He had 11 carries for 77 yards averaging seven yards per carry. He also had six tackles with a fumble recovered. See GCHS Scoreboard below sponsored by State Farm.

Leading in offense were Donte Holder with five receptions from 71 yards with two touchdowns; Payton Lamberson had 11 carries for 50 yards; Caden Wylie finished with a reception for 28 yards. Quarterback Will Cantrell completed five passes for 62 yards and two touchdowns. Henry Todd was one of two for an extra point and average 28-yards per kick off with two punts for 80 yards.

The Pioneers will travel to Adamsville to face the Cardinals Friday night Sept. 15, at 7 p.m.