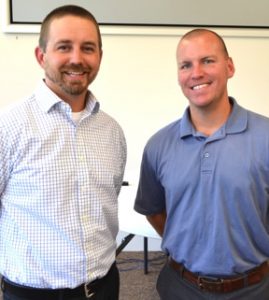 LIONS LEARN ABOUT MHS BAND – MHS band director John Scruggs enlightened Lions Club members on the challenges of operating a marching band with 94 kids. Scruggs said the band has an annual budget of about $75,000, noting that a single instrument can cost as much as $7,000. Lion Chad Ezell welcomed Scruggs to the club.

Scruggs, in his 6th year leading the Bulldog band, said the program is growing in numbers and recognition.

“We have 94 kids marching this year and about 75 in the middle school program,” Scruggs told Milan Lions last Thursday.  “I want to continue the tradition built by Pete and Janie Evans, Todd Hill, Keith Brown and Gary Reeves.  Next year I’d love to march 100 kids,” he said.

The Milan band finished 3rd in the state last year in Division 2, not to mention stacks of trophies and honors along the weekend competition tour.  The Color Guard placed in the top two week in and out, something that Scruggs attributed to Ms. Cassie Bratcher.

“It takes a lot of hard work to get where we are today,” Scruggs noted, also lauding the work of Lisa Bryant at the Middle School.  “Our staff and our band parents also work extremely hard but we want the kids in the spotlight,” he said.

Scruggs said the success of the program wouldn’t be possible without the support from the school and community.  The band has an annual budget of approximately $75,000.

“We’re working harder to put ourselves in front of the community and build our brand,” continued Scruggs.  “We’re raising funds year around and the school board is very supportive.  We’re having a new wrap put on our semi-truck that hauls our equipment.  That truck travels all over the state and helps get our brand out there,” he said.

While the annual budget might seem high to some, Scruggs said it takes a lot more money than that to keep the program up to par in regard to uniforms and instruments.

“We have a wish list that we present to the school board annually,” explained Scruggs.  “But this year we laid out a 10-year plan to replace instruments and uniforms and it was over $300,000.  We’re going to do all we can to reach that goal.”

While a field show can cost up to $10,000 for a single season, there are many other costs to factor in over the course of a school year such as copyrights for music and shows, payroll for staff, designs, costumes, equipment,  and props.

“The average age of the instruments owned by the school is 1977,” Scruggs said.  “That’s about 18 years past their life expectancy.”

Mr. Scruggs said it was always a challenge to pick a show each year that is entertaining for halftime shows on Friday night, but competitive for Saturday contests.

On top of that, band students are expected to learn about 70 different songs throughout the year.

“The pep band plays during games,” added Scruggs.  “We march in parades, at Christmas, and learn a Military Melody.  Our kids are always learning new music.”

About one year ago, the band program was rocked when student Zac Yarbrough was killed in a tragic automobile accident.  Yarbrough’s death dampened the spirit of the band’s 2016 season.

To help raise those spirits, Scruggs said this year’s show was titled, ‘Joy’.

Every song the MHS band will play this year contains the word Joy and Scruggs said most fas should recognize most of them.

‘Joy To The World’, ‘Noisy Wheels of Joy’  and  “Jesu Joy of Man’s Desiring” are just a few of the songs that will be heard.

Although Mr. Scruggs hopes to win a state title this year, he said the end game is much bigger than that.

“We want to build this program and educate as many kids as possible.  We have about 17 graduates now that are receiving college scholarships and we want to see that number grow,” he said.

Scruggs is a native of Fruitland and attended Humboldt Schools.  He graduated from Austin Peay in 2001.  He and his wife reside in Crockett County with their three children.

Scruggs was the guest of Lion Victor Parkins.  The Milan Lions Club meets each Thursday at noon inside the conference room of Rhino Construction.