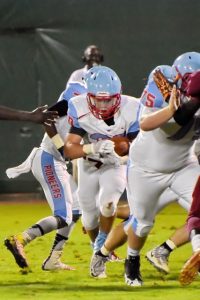 PATTERSON RUNS THROUGH OPENING – Pioneer running back Jake Patterson runs easily through the opening that the offensive line made for him. (Photo by Lori Cathey)

Great weather this past Friday made for a perfect night to open up the 2017 high school football season.  The 25th Annual Sports Plus High School Football Jamboree was held at the Ballpark in Jackson.

All 10 teams scrimmaged over two quarters with a 12-minute clock running with the last two-minutes stopping for all game simulations. In the opening scrimmage Dyer County defeated North Side, 15 to 0, Greenfield followed, beating Jackson Christian, 6 to 0.

Gibson County Pioneers won, 20 to 0, over Humboldt Viking. USJ was the winner over Liberty, 24 to 0, and the final scrimmage of the night saw TCA beat South Side, 6 to 0.

Humboldt started the scrimmage receiving the ball first but on the first play, Humboldt had a bad snap. It was recovered by Gibson County at the 10 yard line. On fourth down and a half a yard, junior running back Ozzy Rico ran in for Gibson County’s first touchdown of the 2017 season. The two-point conversion was no good giving Gibson County a 6 to 0 lead.

On Humboldt’s next possession, Gibson County defense forced Humboldt to turn the ball over on downs.

Gibson County, on their second possession, started their drive with a big gain from running back Rico to the 20 yard line for a first down. GC quarterback Will Cantrell picked up two yards followed by a five yard run by Payton Lamberson.

With 1:34 left in the first quarter, GC’s Rico ran the ball in for a touchdown from the 13 yard line. The two-point conversion was no good but Gibson County extended their lead to 12 to 0.

Gibson County’s final score came off a bad snap by Humboldt that was recovered by GC defensive lineman Noah Stafford in the end zone for a touchdown. Pioneer Cantrell ran the ball in for the two-point conversion for a 20 to 0 Gibson County victory over Humboldt.