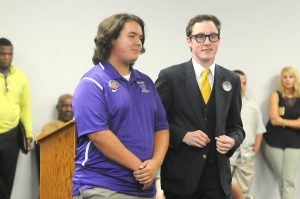 WHAT’S THE MATTER WITH KIDS TODAY? – Grant Hensley (left) and Jacob Landers (right) performed “Kids” from the Nite Lite Theater’s production of “Bye Bye Birdie” for the MSSD School Board. Hensley also spoke to the board about his desire to create an “Explore Kindness” club at Milan High School after his recent trip to the National Leadership Academy camp in Denver, Colorado. Photo by Logan Watson.

More inquiries into the hiring of African-American teachers in the Milan Special School District touched off comments from members of the board and the community last Monday night.
At the beginning of last week’s meeting, board member Yolanda Lett asked for an update on the hiring of African-American teachers since the previous board meeting in June. Director of Schools Jonathan Criswell informed Mrs. Lett and the rest of the board that no additional African-American teachers had been hired following the last meeting, but there had been several interviews. Criswell also noted that the MSSD had pursued the hiring of one African-American, but the district was turned down.
In total, there have been 17 new hires since the end of the last school year across all three schools and the central office, including two African Americans, Sandra Pipkin (Biology) and Danya Love (Special Eduacation), who were added to the staff at Milan High School. As of Monday, July 31, five teaching positions and one educational assistant position were still listed as vacant on the MSSD website: a K-4 teacher at MES, a full-time science teacher, a full-time math/part-time science teacher and an educational assistant at MHS, a STEM Lab teacher at MMS and a district-wide Alternative School teacher.
There were no additional remarks from the board regarding hiring practices, but members of the African-American community in attendance voiced their opinions during the Public Comment portion of the meeting, stating that they felt the MSSD was not doing enough to address the issue.
“It’s offensive to me as a black, African-American man, that every meeting you have, the question is asked, ‘How many African-Americans have you hired?’ and you say, ‘We’ve had several interviews, but we haven’t hired anyone’,” said Shawn Phinnessee, founder of the Milan-based mentoring group More than a Few Good Men, Inc.
Phinnessee noted that he was speaking on a “personal level” when he referred to his wife, Shereka Phinnessee, the Technology Assistant at MES.
“She’s been a dedicated teacher here for a while, but the job you speak of, you just add on an extra responsibility and say, ‘Just go ahead and do it.’ Don’t even try to give her the extra pay that she rightfully deserves.”
Phinnessee stated that he would “stand at every meeting if he had to” because teachers are being “looked over” while African-Americans are well-represented in the student population and the football and basketball teams. 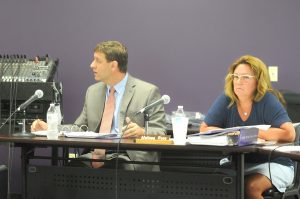 MINORITY HIRES – Director of Schools Jonathan Criswell updated the board on the hiring of African-American teachers at last Monday night’s meeting of the MSSD Board of Education. Although Director Criswell stated that one such applicant had turned down a position within the MSSD, some members of the public in attendance stated that they did not feel enough was being done to hire African-American teachers. Photo by Logan Watson.

“It’s not a priority to get African-Americans here,” Phinnessee continued. “It’s not. I wish I was wrong. The proof is in the hiring.” Phinnessee went on to allege that the board looked over people in Milan to bring in teachers from out of town.
“I’m very disappointed. As I look around, I don’t see African-American teachers here.”
Following Phinnessee’s remarks, Andrew Lett, husband of board member Yolanda Lett, suggested that Director Criswell go into the community to speak with the people on “that side of the tracks”, referring to the residents of Milan’s Third and Fourth Wards.
“All this chaos…they need African-American teachers. They need it bad, but they need real teachers,” Lett told the board. “Look past the skin color. I don’t understand, why is it so hard for people on this side of the tracks to get along with people on the other side of the tracks? Why is it so hard for y’all to agree on things for the kids? Let’s get away from all that racial nonsense. If they’re qualified, hire them.”

CELEBRATING SUCCESS – The Board was treated to performances of “Kids” and “How Lovely To Be A Woman” from the musical “Bye Bye Birdie” by Grant Hensley, Jacob Beals and Hailey Boles from the Nite Lite Theater.
Hensley also spoke to the board about his experiences at the National Leadership Academy in Denver, which he attended with other students from Humboldt High School last month.
“This camp has changed my life forever,” Hensley said. “It has helped me become a better person overall.” in addition to other trips and group activities, the NLA students visited Columbine High School and spoke with Frank DeAngelis, who was principal at the time of the school’s infamous massacre in 1999. Hensley also expressed interest in creating an “Explore Kindness” club at Milan High School, which focuses on random acts of kindness.
“That whole camp was just truly heart-changing,” said Hensley. “It inspired me.”
Director Criswell also recognized Vickie Dunaway, who received the USDA Best Practices Award for increasing the participation rate of the school lunch program and the increased use of fruits and vegetables in those meals. Dunaway stated that only 12 school districts in the state earned the award. Dunaway also recognized Brenda Scott from MHS and Sarah Aslam from MMS who implement the programs.

DIRECTOR REPORTS – Director Criswell stated that there had been several resignations since last month’s meeting, creating several open positions which can be viewed on the district’s website, www.milanssd.org. The MSSD is still in the process of hiring a teacher for the Alternative School, but the Teacher Assistant position at the Alternative School has been filled. He also updated the board on the status of the Carrier Project, noting that the Department of Education was still in the process of reviewing the numbers with Carrier, with a final decision being made in early August.

PURCHASES – The board voted to approve several one-time purchases using savings from the 2016-17 FY Budget. The MSSD carried over $730,559 from the last fiscal year and will use $199,848.30 of the savings to finish updating the security cameras at all three schools ($24,848.30), install a new sound system for the MMS cafeteria ($5,000) and purchase an additional storage building at MMS ($10,000). The funds will also be used to replace Bus 79 and purchase two maintenance trucks. Two of the three maintenance vehicles currently in use have numerous issues and cost the MSSD over $3,700 in repairs last year.
In addition to the one-time purchases, the board received a request for a total of $40,000 to be divided among the bands and sports programs. However, the board agreed that the request fell under the umbrella of program development, and would have to be addressed at another meeting. After the purchases, the MSSD will put $530,710.70 into the fund balance.

OPTIONAL DEDUCTIONS – The board voted to approve the addition of two optional deductions from the MSSD employee payroll. School workers will now be able to have their auto insurance through Horace Mann deducted from their paycheck and donate an amount of their choosing to the Gibson County Imagination Library.

CLARIFICATION – In the July 4 edition of the Mirror-Exchange, it was reported that the initial vote to approve the MSSD’s 2017-18 Fiscal Year Budget failed to pass because of “no” votes from board members Yolanda Lett and Greg Horton. Both Lett and Horton requested additional materials, forcing the board to schedule a Special Called Meeting in which to discuss any outstanding questions or concerns about the budget.

The Mirror-Exchange reported that neither Lett nor Horton attended the Special Called Meeting, but at last week’s meeting of the MSSD School Board, Lett stated that she had schedule conflicts that were unable to be resolved. Lett wanted to clarify that she had requested that the Special Called Meeting be moved to a new date and time so that she could attend, but the change was unable to be made.