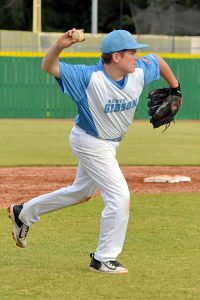 OUT AT FIRST BASE – NG All-Star third baseman Ethan Hutchison fields a bunt attempt and throws out a base runner to end the inning. (Photo by Lori Cathey)

Next NG All-Stars won 7 to 4 over McKenzie, facing them for the second time in the tournament, to advance to the semi-final game. NG All-Stars and McKenzie both scored two runs in the first inning to make it 2 all. Neither teams scored in the second or third inning. In the top of the fourth inning Collin Skelton hit a two run home run with one out to give NC All-Stars a 4 to 2 lead. But Bradford came right back and scored two runs in the bottom of the inning, tying the game at 4 all. NG All-Stars scored three runs in the top of the sixth inning to take a 7 to 4 lead. McKenzie was unable to score in the bottom of the inning for a 7 to 4 NG All-Stars win. NG All-Stars pitcher Matthew Reynolds was the winning pitcher with nine strikeouts with only two walks.

In the championship game the NG All-Stars had no luck at all with Milan scoring four runs in the first inning and adding five runs in the second inning to take a 9 to 0 lead. In the top of the third inning Ethan Hutchison hit a two run home run to make it 9 to 2. Milan scored three runs in the bottom of the inning for a 12 to 2 final to end the 2017 baseball season.