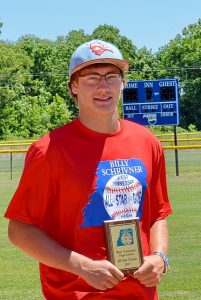 HUGHES PLAYS IN ALL-STAR GAME – Gibson County’s Tyner Hughes played first base for five innings and went 1 for 2 and scored a run during the All-Star game. (Photo by Lori Cathey)

Hughes, who played for the Red Team, played first base for five innings. He went 1 for 2 and scored a run during the All-Star game. The Gray Team won 10 to 7 over the Red Team.

Hughes, who batted .343 and led the team with 23 stolen bases, and 24 RBIs, defensively had a fielding percentage of .954 for his senior season. He was named to 14-A All-District Team and All-District Tournament Team. His plans are to further his education and play baseball at Dyersburg State Community College.

Schrivner, who passed away in 2014, was a well-known basketball and football official for more than three decades, staying involved with the Tennessee Secondary School Athletic Association for 60 years. Schrivner helped found the Jackson Madison County Sports Hall of Fame and later became one of its inductees. 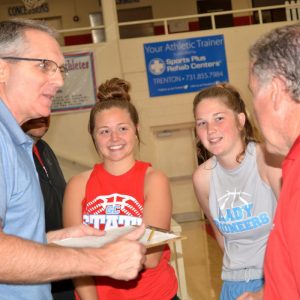