Holt Shoaf said the task of removing the historic press from the Milan Compress was ‘painful but necessary.’

Monday morning, the 40-foot tall, 220 ton press towered above the rafters of the warehouse it was installed in just off Broad Street in 1987.  After the press was shuttered in 1994, the tower that was built over it began to deteriorate.  By Friday, the entire press made of steel and cast iron had been removed for scrap. 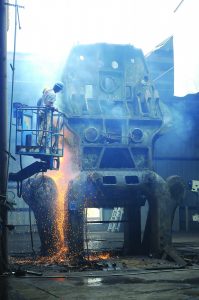 “It was to the point that we had to do something,” said Shoaf about removing the press.  “It was impractical to replace the tower. Time marches on,” he said.

Shoaf said that particular press, known as a Webb 80, was used extensively until modern farming techniques made it obsolete.

Now days, cotton is transported straight from the field to the gin where it is pressed into bales.

“A cotton press was over a half-million dollars so not many gins had one back in the day,” explained Shoaf.  “Then the price dropped to around $150,000 and just about every gin bought one, that’s when we stopped using this press.”

Shoaf’s grandfather, Richard Barrett Shoaf, erected the first press, a Moss 90, back in 1919 in the same exact location.  It was purchased used and trucked in from Port Gibson, Mississippi.  It ran for almost 70 years until suddenly a loud ‘boom’ rattled the entire neighborhood in the fall of ’87.

“The old press used big cogs, like the gears in a manual transmission, to make the press block come up,” noted Shoaf.  “One cog broke, probably from metal fatigue and that caused all of the cogs to break, kind of like shooting a machine gun, and the whole thing {the press block} fell disastrously,” he said.

Ironically, Dale Nelson was working at the compress the day the cogs broke.

“I’ll never forget the sound it made when it went down,” recalled Nelson, who grew up hauling cotton from the fields to the Milan Compress and watched thousands of bales get smashed by the original press.  “I watched this thing run a lot while my truck waited to be unloaded.  I can remember trucks being backed up all the way down the street out here.” 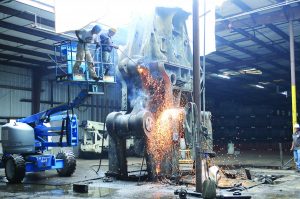 Last week, Nelson was back at the compress disassemble and remove it from the building.  Nelson founded Dale’s Recycling in 1983 while he was working as a truck driver hauling cotton.

“I continued to haul cotton after I started the recycling business,” he said, adding that the compress was his first commercial account.

Over the last 20 years in the scrap business, Nelson said he has removed about 12 presses exactly like the one he was working on last week.

“I was taking one down in Mississippi awhile back and a guy walked up and offered me $100 to show me where another one was buried,” Nelson said.  “I thought he was crazy but it was exactly where he said it was and we dug it up.”

Ronnie Tatum started managing the Milan Compress on May 1, 1991.  He remembers scores of workers buzzing around the huge machine to complete all the jobs that went along with pressing a 500 lb. bale of cotton.

“We used to have as many as 60 people all over the compress loading, weighing, taking samples, sorting, tagging, stacking and working the press,” said Tatum.  “During it’s time, this was a very modernized operation.”

Tatum said last year it only took about 12 employees to perform those same tasks associated in the production of 130,000 bales of cotton due to advanced automated machinery.

Shoaf said he’ll never forget the loud steam whistle that sounded off every morning at 7 a.m. when the press was in operation. 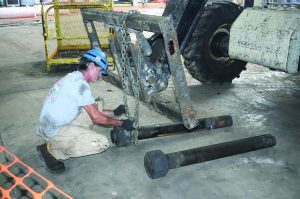 Two of the bolts used to hold the compress together. Crews had to cut through these bolts and other solid steel parts in order to disassemble the massive compress. Photos by Logan Watson.

“Back when the press was running the morning shift was started with a steam whistle.  The whistle came off of a sunken steamboat in the Mississippi River.  My grandfather’s brother lived on the river at Fulton, near Fort Pillow. He owned a large Island and spent much time on the river.  He procured the whistle for his brother and all of Milan heard it every morning at 7, but only when the press was running, since it ran on steam.”

Mr. Shoaf said it was painful watching the press come down.

“I spent untold hours watching the press work when I was a child,” Shoaf said.  “It was exciting.  There was so much activity around it and everything had to happen in unison.  The whole process was mesmerizing.  The press is the reason my family is here.  It is the embryo of our heritage in Milan.” 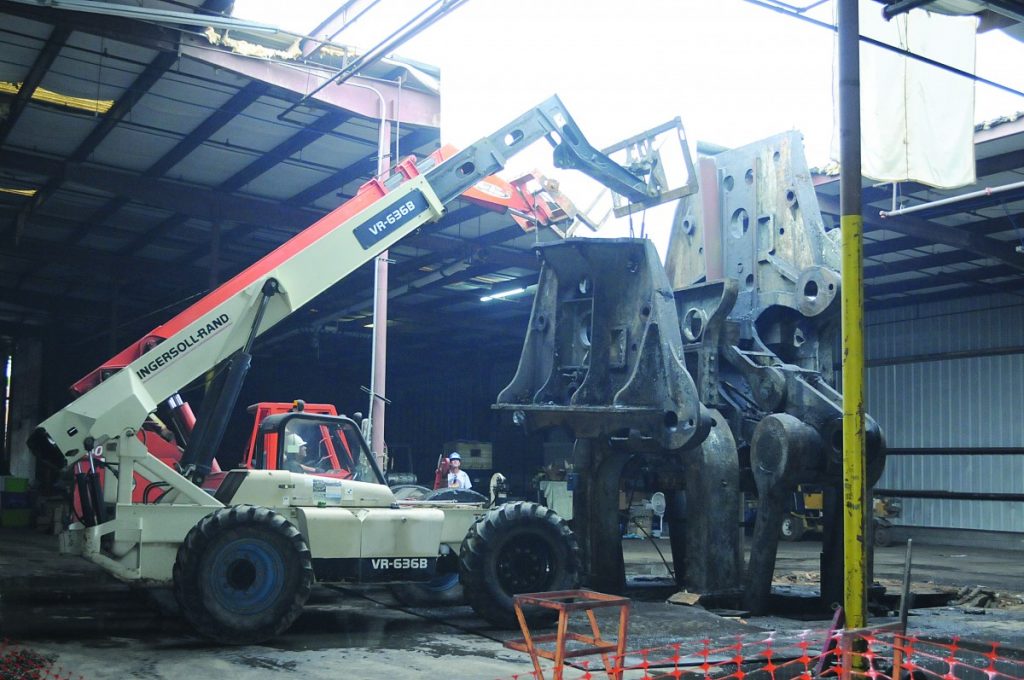