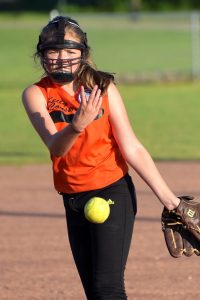 WINNING PITCHER – NG All-Star’s Hannah Prestininzi has her eyes on the catcher. Prestininzi pitched a complete game with seven strike outs to start the state 10U softball tournament at Dyer. (Photo by Lori Cathey)

Thursday night, behind great pitching, and several extra base hits, NG All-Stars raced past Dresden to win the State Championship 14 to 1.

NG All-Star pitcher Maya Turner struck out the side against Dresden to start the game. In the bottom of the first inning NG All-Stars scored three runs to take a 3 to 0 lead. Reaching base for NG All-Star were Avery Owens, Maya Turner, Georgia Lannom and Haley Mingle. Dresden scored their only run in the top of the second inning to make 3 to 1 NG All-Star.

In the bottom of the third NG All-Stars scored 11 runs to extend their lead to 14 to 1.During the inning Hannah Walters tripled to center field, Avery Owens and Georgia Lannom both singled. Dresden was unable to score in the top of the fourth inning for a 14 to 1 NG All-Star state championship run rule victory. NG All-Star pitcher Maya Turner struck out 10 batters and only allowed two batters to reach base for the game.

Leading the NG All-Stars were Hannah Walters 2 for 3 with a triple, and Maya Turner 1for 3 with a double. Ella Kate McCurdy, Avery Owens, Georgia Lannom, and Emmi Reed all hit singles.

NG All-Star’s pitchers Maya Turner and Hannah Prestininzi combined to lead the team to a 3-0 record and a State Championship.