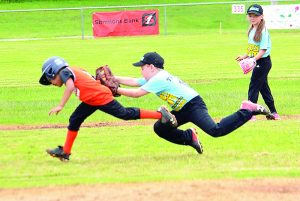 SHE’S OUT – Shady Tint’s Brodie Thomason catches the ball and chase downs Volunteer Insurance’s Kortland Shanklin for an out during the championship game. (Photo by Lori Cathey)