FacebookEmail
| logout
MEGA gives Milan teachers more than $30,000 for school extras
By Steve Short
More than $30,000 was given to teachers in Milan schools May 26 by leaders of the Milan Endowment for Growth in Academics.
The funding is in the form of 29 grants that will provide classroom extras for students during the 2017-18 school year.
For the 27th straight year, MEGA, a private endowment built with contributions from industry, businesses and individuals, will fund equipment, programs and events.
Grants totaling $30,365 will pay for a wide variety of items, ranging from literacy programs, student theatrical shows and laptop computers, to a trip to Discovery Park and mannequins for CPR training.
Grants were handed out by MEGA president Bruce Niven and board members Julie Allen Burke and Thorne Barbour during the end-of-year luncheon at the high school.
Since its inception in 1990, and including this year’s awards, MEGA has given 850 grants to Milan teachers worth $589,920.
Prominent grants
Three MEGA grants honor special contributors to the endowment. They are designated by the MEGA board each year, usually for large projects.
The 2017 Blake and Sara Wilkinson Grant honors a MEGA founder, Blake Wilkinson, who was personnel director at Ceco manufacturing before passing away in 1999. He and his wife, Sara, a former Milan teacher, helped organize MEGA. The Wilkinson grant for $3,495 went to Milan Middle School teacher Becky Reeves for “Got the Mic, Dawg” to purchase theater equipment.
The 2017 Ceco Door Grant pays tribute to the Milan firm that contributed $10,000 in seed money to start the MEGA endowment. Ceco has contributed more than $80,000 to MEGA over the years. This year’s Ceco grant for $2,392 went to Milan Elementary teacher Amber Lowery for “From Hands to Mind.”
The Allie V. Fly Blankenship Grant honors the late Ms. Blankenship, who bequeathed $41,000 to MEGA, the largest contribution from an individual donor. The 2017 Fly Blankenship grant for $3,339 went to Milan High teacher Valerie Caldwell for “A Novel Idea,” to buy copies of classic novels. 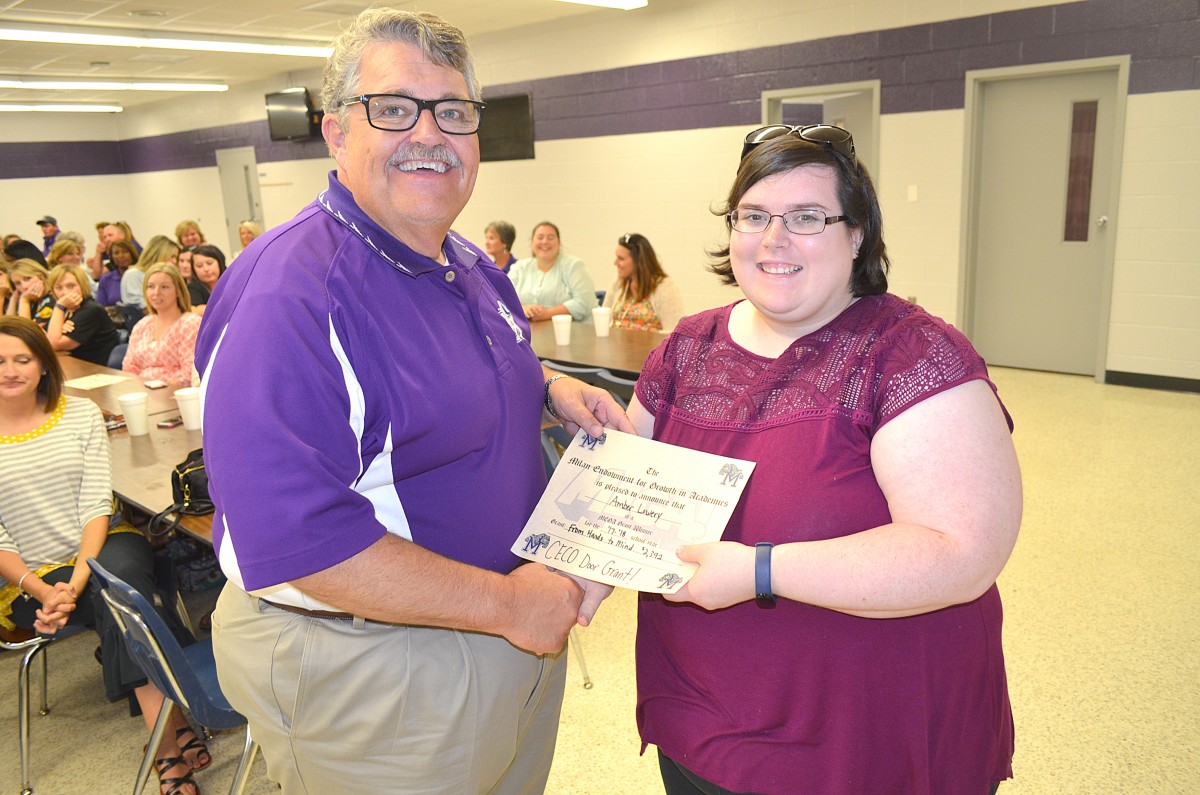 MEGA GRANT WINNER – Amber Lowery (right), a teacher at Milan Elementary School, was the recipient of the 2017 Ceco Door Grant for nearly $2,400 from the Milan Endowment for Growth in Academics (MEGA) at the Milan school luncheon May 26. Making the presentation was MEGA board member Thorne Barbour. 29 grants totaling over $30,000 were awarded to teachers in all three Milan schools.