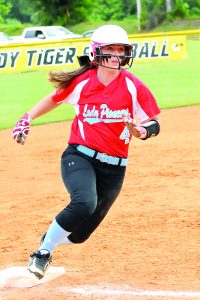 Thursday afternoon the Gibson County Lady Pioneers ended their season with a heartbreaking loss to Union City, 4 to 3 in the bottom of the seventh inning in Halls. At the conclusion of the 14-A softball tournament Justyce White, Maddie Neal, Lexie Garner and Macey Neal were all named to the 14-A All-District softball team. Justyce White and Maddie Neal both were named to the 14-A All-District Tournament softball team.

During the 2017 softball season the Lady Pioneers accomplished a winning season with a record of 15-14 and set some new records for the Lady Pioneers program. They finished in second place for the regular season and third in the 14-A District tournament.

The Lady Pioneers emerged victorious Monday night in the first round of the District 14-A softball tournaments, with a big win over the Union City Lady Golden Tornadoes 6 to 1.

Macey Neal singled up the middle to led off the bottom of the first inning. Maddie Neal laid down a sacrifice bunt and Macey Neal scored on a RBI single to right field by Justyce White. Savannah Fletcher singled to right field and Justyce White scored on a throwing error. Chloe Hopgood walked, Allie Smithson reached base on an error and Grace Hollis hit a three RBI triple down the right field line to give Gibson County a 5 to 0 lead.

The Lady Pioneers added a run in the bottom of the second off Macey Neal double to centerfield and a RBI single to left-center field by Maddie Neal to take a 6-0 lead for Gibson County.

Union City scored a run in the top of the third inning. With two outs, Lady Golden Tornadoes’ Justice Pearson singled followed by a RBI double from Gracie Laster to make it 6 to 1 Gibson County.

Neither team was able to score in the fourth or fifth inning. The Lady Pioneers scored their final run in the bottom of the sixth inning to give Gibson County a 7 to 1 lead.

In the top of the seventh inning the Lady Golden Tornadoes scored two runs off a single by Pearson. But Lady Pioneer pitcher Lexie Garner struck out Kallie Worrell to end the game for a 7 to 3 win.

GC Lexie Garner picked up the win for the Lady Pioneers.  She pitched 6 1/3 innings allowed four hits, two walks with four intentional walks, struck out four and two earned runs. Chloe Hopgood pitched 2/3 of an inning with one strikeout.

Macy Neal was 2 for 4 with a double and scored two runs; Maddie Neal, 2-3 with 2 RBIs and a sacrifice. Grace Hollis, 1-3 with a triple and three RBIs. Justyce White, Ashley O’Daniel, Emery Presley and Savannah Fletcher all had singles.

On Wednesday the Lady Pioneers took on the South Fulton Lady Red Devils. Lady Pioneer Macey Neal started the game off with an infield hit, stole second base and went to third on a passed ball. Maddie Neal followed with a RBI single to centerfield to give Gibson County a 1 to 0 lead.

GC pitcher Chloe Hopgood only faces 13 South Fulton batters in the first four innings. Junior Ashley O’Daniel led off the fifth inning off with a triple down the left field line. Maddie Neal and Justyce White both hit back-to-back doubles to score two runs to give Gibson County a 3 to 0 lead over South Fulton.

The Lady Red Devils scored six runs in the bottom of the sixth inning off four singles to take a 6 to 3 lead.

The Lady Pioneers were unable to score in the top of the seventh inning for a 6 to 3 loss to South Fulton. Justyce White was 2 for 4 with two doubles and RBI to lead the Lady Pioneers. Maddie Neal, 2 for 3 with a double and two RBIs and Ashley O’Daniel, 2 for 2 with a triple and a double. Allie Smithson, Jacie White and Macey Neal each had a single. Chloe Hopgood pitched 6 innings gave up one earned run, four hits, had two strikeouts and no walks.

Thursday afternoon the GC Lady Pioneers travel to Halls to battle with Union City Lady Golden Tornadoes in the semi-final game of the 14-A District tournament.

In the bottom of the third inning Tiffanie Oldaker lead the inning off with a double to right field. Crittendon walked but with one out Olivia Matherly hit a two RBI single up the middle to give Union City a 2 to 0 lead. Oldaker tripled to centerfield with two outs in the bottom of the fourth inning. Oldaker scored off a single by Justice Pearson to extend Union City lead to 3 to 0.

GC senior Allie Smithson led the inning off with a single to left field then she stole second base. Jaci White laid down a sacrifice bunt to move Smithson to third base.  Smithson scored on a wild pitch to get the Lady Pioneers on the scoreboard. Grace Hollis reached on a fielding error and Savannah Fletcher singled to right field with one out. Hollies scored on a sacrifice fly by Macey Neal to make it 2 to 3 Union City. Fletcher scored on a double to right field by Maddie Neal to tie the game at 3.

The Lady Golden Tornadoes were not able to score in the fifth for sixth inning. With the game tie at 3 all the Lady Pioneers didn’t score in the top of the seventh inning.  In the bottom of the seventh inning with two outs Taylor Crittendon is intentionally walked to load the bases. With the count one ball and two strikes Lady Golden Tornadoes Kallie Worrell scored the game-winning run on a wild pitch to end the Lady Pioneers softball season.

Lady Pioneer Maddie Neal was 1 for 3 with a double and a RBI to lead Gibson County. Justyce White was 1 for 2, Savannah Fletcher, 1 for 2. Allie Smithson, 1 for 3. Lexie Garner and Chloe Hopgood both pitched for the Lady Pioneers. Garner pitched four innings gave up two earned run, three hits, one intentional walk and three strikeouts. Hopgood pitched 2 2/3 gave up no earned runs, one hit, two walks, two intentional walks and two strikeouts.