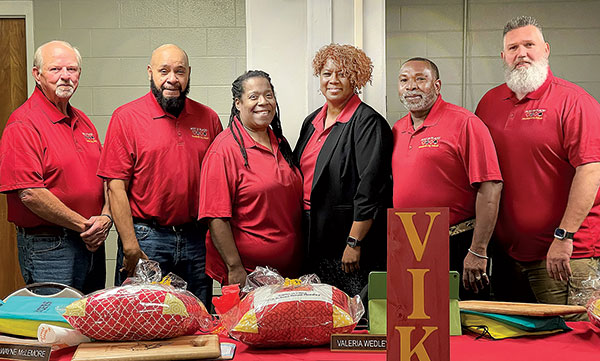 SCHOOL BOARD – The Humboldt City Schools board members met last Thursday, January 19 at their new meeting time of 5:30 p.m. During the Superintendent’s report, Dr. Janice Epperson (center) surprised the board members with gifts from each school in honor of school board member appreciation month. Board members attending the meeting were (from left) Wayne McLemore, Terry Johnson, Valeria Wedley, (Dr. Epperson), Leon McNeal and Mark Hodge.

The first school board meeting for the second semester of the year met last Thursday, January 19 to discuss a few items pertinent to the 2023-2024 school year.

One of the biggest topics on the agenda discussed was the Trane presentation given by Jim Crone. The board has heard a few energy savings companies’ plans for the Humboldt City Schools system, some just within the last six months of 2022. However, no such company has been chosen for the job. Crone and his colleagues were hopeful to get the support of the board and leave with a letter of commitment in order to get the ball rolling for an investment grade audit on the schools’ needs.

During his presentation, Crone told the board Trane Energy Services, in partnership with the Energy Efficient Schools Initiative (ESSI), implemented this energy savings plan to help school systems conserve funds for other projects by saving them money in the future the schools are currently spending on utilities. He told the board that the florescent lights currently in use by Humboldt City Schools would be one of the first steps taken to help cut down energy costs with the intention to move to all LEDs.

Board member, Valeria Wedley, expressed her concern to Crone about the costs of the audit once the results came back if the school decided not to go to the next phase with the company. Crone explained that if Humboldt City Schools decided not to go through with the project, then they would be on the hook for approximately $9,800. This raised concerns with another board member, Mark Hodge.

Wedley and Hodge, as well as board member, Wayne McLemore, agreed that the Humboldt City School systems needed an upgrade in their lighting infrastructure, but were more than a little hesitant to agree to Trane’s proposal since it would lead to another loan. Given the debt the schools have already accumulated, the word loan did not sit well with the board members, especially with Hodge who requested the board look at this kind of plan closer to budget time.

Crone did his best to reassure the entire board that the savings from becoming more energy efficient would pay for the program and the initial loan without ever having to dip into any extra funds.  He guaranteed them that Trane and ESSI would personally write a check for any savings discrepancies per year that was promised, but ultimately, the board was too skeptical about approving a commitment letter for taking a $9,800 gamble on a program that might not get approved by the city.

“We should turn it over to Dr. Epperson and her financial staff, and let them get back with us with what they want to do about it,” board member, Leon McNeal, said when he requested the discussion be tabled for a later time. “Let them do the numbers and get back with us and tell us what they feel is best for us to vote on. If they feel like this is a good thing for us to do, then she can sit down with the mayor and (city treasurer) Kim Hadley and then bring it back to us to vote on.”

While other school systems around Gibson County have opted in to this energy program, the board voted unanimously to table the Trane proposal until Dr. Epperson and her financial team had the opportunity to break down the program and prove its’ cost effectiveness to the board as well as the city. If the board were to approve this plan in the future, the initial loan for the program would need to be approved and applied for by the city of Humboldt because Humboldt City Schools does not have taxing authority like special schools districts.

Another big item on the agenda was the presentation of the Five-Year Strategic Plan for Humboldt City Schools. A committee and subcommittees comprised of individuals working within the school system created this plan in order to have a set of clear goals for the teachers and administrative staff in Humboldt to implement for the betterment of the students.

The focus of the plan is on four key target areas including talent, academics, culture/climate and operations (TACO). Within each focus area there are specified goals listed with detailed action steps for setting this plan into motion for success.

The board approved the five-year strategic plan 5-0.

Other items on the agenda were as follows:

•The board policy 6.303 involving interrogations and searches was up for vote to add an addendum regarding installing metal detectors to all Humboldt City Schools. Dr. Epperson explained that the HCS have acquired two metal detectors for immediate use in the Humboldt Jr./Sr. High School with hopefully more on the way for East Elementary and Stigall Primary. The board passed this addendum 5-0.

•Keli Gooch, daughter of the late East End Elementary Principal Ann Williams, presented a proposal to have the library at East renamed and dedicated in honor of Ms. Ann for her lifelong career of loving HCS and students. The board gave an energetic unanimous approval. Once the name change was given a green light, Dr. Epperson announced that there were donated checks already given in honor of Ms. Ann for the project and East Elementary.

Thursdays in the HJSHS Cafeteria