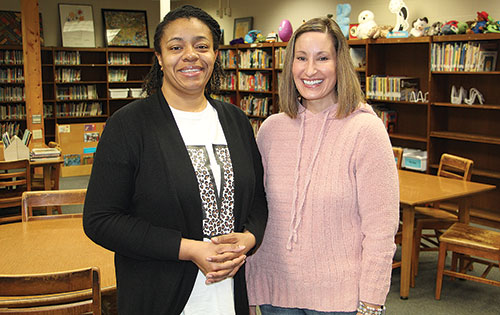 LIBRARY DEDICATION – The library at East Elementary School will soon be named the Ann S. Williams Library and Literacy Center at the request of Williams’ family as a way to honor her career as an educator in Humboldt. Her daughter, Keli Gooch (left), requested the dedication, which was brought before the Humboldt School Board and approved. East Elementary School Principal Debbie Sheehan (right) is thrilled be able Williams’ legacy as an educational icon in the Humboldt community.

Practically everyone in Humboldt knew or knew of the late Ann Williams. She spent most of her life educating the children of Humboldt. Now, the library at East Elementary School will be named the Ann S. Williams Library and Literacy Center in her honor.

Williams’ daughter, Keli Gooch, who is following in her mother’s footsteps as an educator, said the idea of memorializing Williams came shortly after she passed. The family was talking about people sending flowers and donating to East Elementary in Williams’ honor. Gooch’s niece (Williams’ granddaughter), Allie Ritchey said, why not ask them to donate to the library and name it after her?

This got the ball rolling. Gooch contacted superintendent, Dr. Janice Epperson, with the idea of honoring her mother, who spent so many years leading East Elementary as 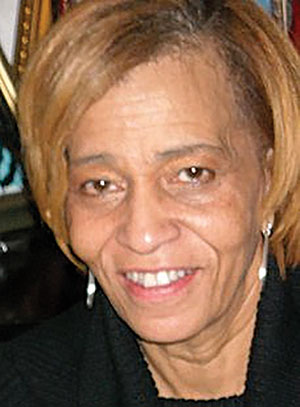 school principal, by dedicating the library to memorialize Williams. Gooch said Dr. Epperson thought it was a wonderful idea.

Dr. Epperson told Gooch it would need to be approved by the Humboldt School Board. Last Thursday evening, the school board unanimously approved memorializing Williams by naming the library after her.

Prior to the vote, Gooch addressed the board, saying, “If the words, ‘heads down, heads up’ ring a bell, you probably attended East End Elementary. With those words, Principal Ann Williams could command instructional control and grab the attention of 600 students instantly. My mother, Ms. Ann Simmons Williams, spent the entirety of her career serving the Humboldt community and the students of Humboldt, Tenn. She dedicated over 40 years of her career with roots in the classroom.”

Gooch spoke of her mother who began working as an elementary teacher for Humboldt City Schools in 1969. She earned her first Masters Degree in Special Education from Memphis State University in 1973. Williams served as principal of East End Elementary for 20 years, Gooch told the board. While principal, Williams led East End to be proclaimed as one of the top 10 schools in Tennessee. She earned her Masters Degree in Administration and Supervision in 1985. In 2009, Williams accepted the position of assistant superintendent of Humboldt City Schools. Williams was diagnosed with Alzheimer’s in 2016.

“My mother passed away peacefully on November 27, 2022,” Gooch continued. “As my sister and I were talking, we were searching for ideas of how to best honor my

mother’s memory. We could think of no better way than to give back to the community and children my mother loved so dearly. Today, I stand before you on behalf of my sister, Kristie Ritchey, in her absence and my entire extended family to request that the library at East Elementary be dedicated and named the Ann S. Williams Library and Literacy Center. I’m asking that Humboldt City Schools allow community donations as well, so our students can get the most up-to-date books, equipment or whatever Dr. Epperson and the administration at East Elementary deem necessary that our scholars have high literacy scores.”

Gooch said the details are still in the works as for what the dedication would look like, but her vision would be a plaque on the door or wall, and the name, Ann S. Williams Library and Literacy Center, displayed for everyone to see.