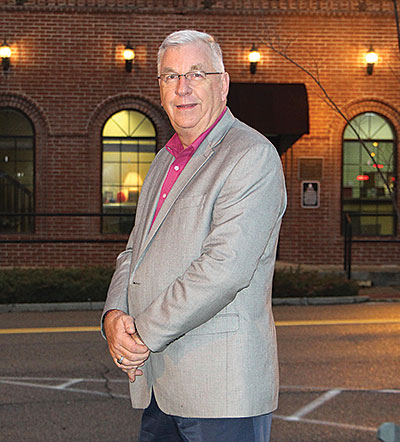 ON THE MOVE – Humboldt Mayor Marvin Sikes talks about Humboldt in 2022 and what he expects in 2023 in the annual State of the City statement.

Over the past several years, it has been customary for the sitting mayor to look back at the previous year, while looking forward into the current year to offer the state of the city. Mayor Marvin Sikes sat down with the Humboldt Chronicle last week to let Humboldt citizens know of the happenings going on in the Strawberry City.

“2022 was a good year—a unique year—but a good year,” Mayor Sikes said. “A new city board was sworn in with new ideas. We’ve got so much going on in the city that people don’t see.”

Two of the biggest events last year was Tyson getting two production shifts running with around 1,200 team members and FedEx building a 333,000 sq.ft. distribution center.

“These facilities offered more opportunities for so many people and more good-paying jobs,” Sikes added of activity in the Gibson County Industrial Park located in Humboldt. “There are two investors looking at property in the northern part of the city and I expect there will be more.”

“The frontage property is getting interest,” Sikes said of available land to develop in the industrial park with access to Central Ave. “We’re pursuing hotels, grocery stores and truck stops. North (Humboldt) is still growing.”

Mayor Sikes pointed out that Humboldt has seen a housing boom like it has not seen for decades. He estimated there were 50 new houses, either built or being built, last year. There has also been a massive jump in home renovations.

“Houses are going up all over town. Hunter’s Ridge, Pritchard Place, the Southern Baptist duplexes, Chere Carol, Woodhaven—people are investing in Humboldt,” Sikes noted. “There are even more renovations. There are (construction) dumpsters all over Humboldt.”

“People are interested in Humboldt,” Sikes explained. “Strawberry Hill has new owners. The Coffee Shop has new owners. BR Supply moved into their big, nice new facility where the Chevrolet car lot was. Helping Hand is on 22nd Ave. and have expanded. They do a wonderful job helping those in need. I’m proud of what they’ve done for Humboldt.”

Looking forward to 2023, Sikes expects the growth will continue. With Blue Oval City on the horizon, industries and other commercial endeavors will be looking all over West Tennessee for a place to expand their operations, including Humboldt and Gibson County.

“Blue Oval could have an effect on Humboldt,” Sikes said. “It’s coming. We know that. We have to be prepared.”

Mayor Sikes spoke about several things coming in 2023 that Humboldt citizens can be on the lookout for around town. One of the biggest will be the downtown water tank getting a new paint job. Sikes said they are working on the design. Soon, workers will be welding a skirt all the way around the tower’s stands for both protection of the workers and to keep paint from dripping everywhere.

“The downtown water tank was Humboldt first, built in 1927,” the historian mayor noted. “It’s been painted silver, white. Work should begin next month and be finished by April, right before the Strawberry Festival.”

Sikes said there will be another round of street repaving in 2023. The city has a nice chunk of ARPA funds from the federal government stimulus package. Between paving and doing some major flood control on the west side of town, Sikes said he would like to spend at least $700,000 of the stimulus money. There would be no taxpayer money going for these projects.

The state will be doing a traffic study on Central Avenue with the added truck traffic from Tyson and FedEx. The traffic lights in that area could be reworked to keep traffic moving better and safer.

Mayor Sikes said interviews with five candidates for Humboldt fire chief will take place in a few days. Sikes said two of the candidates are currently with the Humboldt Fire Department, one is from Milan and the other two are from the other parts of the state. Sikes praised acting chief, Lee Kail, for keeping the fire department running smoothly after the retirement of Chief Chester Owens last year.

Another position to be filled is the director of the Humboldt Senior Center. Sadly, Director Archie Cox recently passed away.