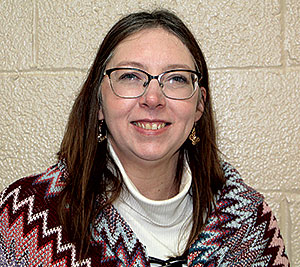 The Humboldt Chronicle officially has a new face that has joined their team as Tabitha Howell has accepted the administrative assistant position. Her first day on the job was Monday, January 9.

“We feel extremely lucky to find someone with newspaper experience to join our team,” Senior Editor Danny Wade said of hiring Howell. “Tab has hit the ground running and re-learning the ropes.”

Howell is originally from Tiptonville, Tenn. and in 1994, she received her Associate’s Degree in business systems and technology from Tennessee Technological Center, where she completed classes in accounting and graphic design. This degree translated well into an eight-year career working for a print shop in Martin, Tenn. working on compositions. From there, her move into the newspaper industry was rather simple. She began working for the Lake County Banner where her main job was in designing and building various ads for the paper

Howell worked for the Banner for 12 years before taking a break from the newspaper world to utilize her skills in accounting as the Lake County mayor’s bookkeeper and later as an accounting clerk at a construction company. From the time she left the Banner, however, she mourned the loss of working in the field she loved best. She gushed about how excited she was that this position with the Humboldt Chronicle became available and applied right away.

“I am excited to have Tabitha join our staff,” said General Manager Lee Ann Butler after Howell accepted the position. “I knew pretty quickly with her newspaper background and office experience she would be a great fit.”

Currently, Howell lives in Fowlkes, Tenn. with her husband of three years, Greg Howell, and 11-year-old stepson, Eli. The couples’ other two children, Carol and Meagan, are out on their own now, but visit home as often as they can.

“The drive into work allows me to get good and awake,” Howell joked of her new 30-minute commute to the Chronicle office. “I get to chill out and listen to my different true crime and movie podcasts.”

Howell has a wide range of interests including the Halloween holiday, reading, diamond painting, music, Disney and watching horror movies with her husband. She is also a lover of all things newspaper, insisting that print is something others are not aware that they are lacking. She explained that people are missing the personal touches and social news from a community by favoring social media over physical newspapers. She was adamant about the significance of newspapers staying relevant in today’s society.

“The best story that I can tell was from when I was working at [The Banner] in 2010-2011 when the big flood hit. The levee had to be blown up in order to lower the water level so the town would not be wiped out. We were on the verge of a mandatory evacuation,” Howell described of an event that solidified her love of newspapers. “I was in charge of the website and had to update it more than two times a day. We lowered the pay wall [so it could be accessed] and printed out articles for people who could not be online. It just showed me exactly how important weekly newspapers are for emergencies. I don’t know how folks would’ve gotten the information otherwise.”

The administrative assistant position became available after long-time employee, Lisa Long, decided to leave the team to pursue other endeavors. Her absence was immediately felt, not only because of the loss of a valued coworker, but also because of how vital the administrative job is for the function of the Chronicle.

“I was very sad to see Lisa (Long) go. We had become fast friends since I joined the Humboldt Chronicle back in April of 2022,” Associate Editor Ariel McRae stated about the vacancy of the position. “Tabs, however, has made the transition much less painful. Within just a week of being on the job, we have already bonded over our mutual love of reading. I think she is going to fit in with our work family perfectly.”

“We were sad to see Lisa (Long) go when she resigned, but Tabitha has picked right up where Lisa left off,” Wade noted. “With her newspaper experience, I know she’s going an added asset to our team. Even though it’s been a few years since she worked in the newspaper industry, it’s like riding a bike; it will come back to you. In a couple of weeks, she’ll be riding that bike with no hands and popping wheelies.”

“Other than being amazed at how technology has made things easier, I just feel at home,” Howell shared about joining the newspaper world again. “The newspaper [career] is very near and dear to my heart.”