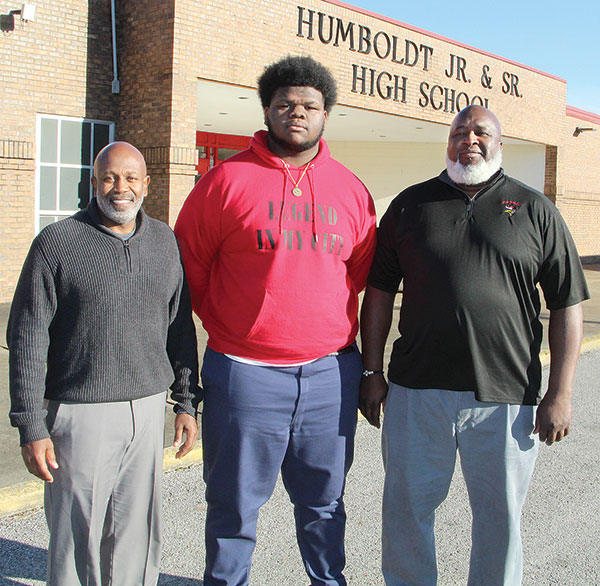 SHIVERS ATTENDS SUPERMAX 1OO – Sophomore phenom, Stephon Shivers (center), continues to get his name out as it comes to football and enticing colleges to give him a look. Shivers was invited to participate in Supermax 100, an NFL combine type event but for high school players. The top 100 players in the nation get invited where they go through drills for college representatives to see. Humboldt City Schools’ Viktor Horton (left) was key in getting Shivers’ invitation. Proud dad, Steve Shivers, sees big things ahead for his son.

Humboldt Viking standout football player, Stephon Shivers, spent part of his Christmas break making a name for himself. Shivers, who is a sophomore at Humboldt Jr./Sr. High School and touted among the top lineman in the country, was invited to attend Supermax 100 Midwest Invitational held at Ford Field in Detroit, Mich., home of the NFL’s Detroit Lions.

The NFL combine type athletic try-out was held December 26 and 27. Humboldt City Schools Safety and Project Manager Viktor Horton, who wears many hats for the school system, was key in getting Shivers’ invitation to the workout. Horton contacted Buck Fitzgerald, co-founder of Supermax 100, to assure Shivers would get an invitation to attend. Fitzgerald is from Nashville and played football for the Tennessee Vols, appearing in two SEC Championship games and winning the 1998 National Championship.

“I’m very familiar with Humboldt,” Fitzgerald said during a phone call interview. “I played with Toby Champion—the great Toby Champion. Stephon is on a lot of teams’ radar.”

“Supermax 100 is for the top 100 student-athletes across the nation, at all positions,” Horton said of the legitimacy of the program. “His (Shivers) name is already out there from camps at Ole Miss, Louisville and Arkansas.”

Supermax 100 is similar to the NFL Combine where the top college athletes are invited to attend and show their skills to NFL scouts, coaches and administrative teams. Instead, this is for high school athletes showing their skills to college teams.

“We did defensive drills,” Shivers said of Supermax 100’s defensive line combine drills. “We did cone drills, one-on-one, ran the 40 (yard dash) and L-drills. My favorite was the one-on-ones.”

During the two-day try-outs, Shivers took advantage of every opportunity. His physical physique is off the charts. At 6’6”, 325 lbs, Shivers had the longest wing-span of 84 inches at Supermax. He also had the largest hands at 10.5-inches. He had an amazing broad jump for a big man at 6 ft., 7-inches.

When asked how many one-on-ones he did, Shivers responded with, “Four—and I won all four! That was my favorite drill.”

Horton had videos on his phone from Supermax where Shivers dominated the one-on-one drills. The commentator was super hyped with Shivers’ performance and referred to him as a freight train.

“The majority of the player were juniors, then sophomores,” Fitzgerald said of the Supermax attendees. “There are very few seniors since most of the top ones have already committed (to a college).

This is currently the dead period for colleges as far as recruiting, according to Fitzgerald. Teams cannot observe but they can watch the live feed in real time.

“Most of the top schools were on the live feed,” Fitzgerald noted. “We’re hearing back from colleges, requesting film, footage of the drills. We get a bunch of requests. Colleges contacted us immediately (regarding Shivers)—nationwide. Every conference in the Power 5 is showing interest in him.”

Fitzgerald said he expects to get even more phone calls from colleges that are interested in talking with Shivers.

“Humboldt may be looked over by some,” Fitzgerald said of small schools not getting the attention like the larger high schools get across the country. “This gives every player an even playing field. I feel Stephon could be in the top 10 in the country. It would be ashamed to not have the opportunities that the big cities get.”

A new portion of Supermaz 100 this year dealt with NIL (name, image, likeness) where college students can get paid. Players can accept money from businesses in exchange for using them in products or advertisements, and can also promote themselves or other companies in public appearances. In June, 2021, the Supreme Court unanimously ruled in NCAA v. Alston that the NCAA was not legally allowed to limit any education-related payments to students. From there, the NCAA left it up to states to develop their own rules and policies. Tennessee legislators did just that.

With new rules in place, the TSSAA’s board of directors took NIL into consideration and created their own rules. Under TSSAA rules, student-athletes are allowed to get NIL “not related to performance” as long as those payments are not an endorsement of their school.

Now, there are both high school and college student athletes taking advantage of the new opportunity to make money from their athletic talent and notoriety. Some are already making six-figures promoting businesses’ brands.

Fitzgerald believes Shivers could capitalize on this new NIL law.

As a sophomore, Shivers still has two more years of high school football ahead of him. He is determined to continue to improve his craft in every aspect of the game of football. With getting so much notoriety as a 10th grader, the sky is the limit for this young man.